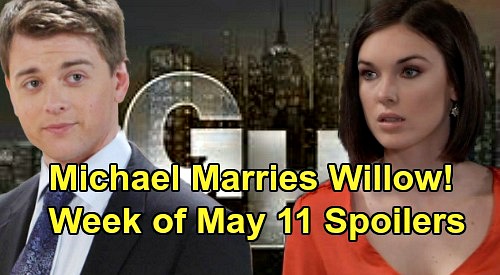 General Hospital (GH) spoilers for the week of May 11-15 tease that marriage will take center stage. After a heart-to-heart about doing what’s best for Wiley Quartermaine-Corinthos (Erik and Theo Olson), Michael Corinthos (Chad Duell) and Willow Tait (Katelyn MacMullen) will agree to become husband and wife. They’ll decide their love for Wiley and beating Nelle Benson Archer (Chloe Lanier) in court are good enough reasons to enter this union.

Later, Lucy Coe (Lynn Herring) will get a crucial phone call from Sonny Corinthos (Maurice Benard). It turns out Lucy will be summoned to officiate Michael and Willow’s wedding, so the news will get back to Sasha Gilmore (Sofia Mattsson). As you can imagine, Sasha will be both devastated and satisfied.

It’ll be hard for Sasha to watch Michael marry another woman, but this has always been the goal. At least the fake affair will be worth it on some level. Sadly, General Hospital spoilers say Sasha will resort to some terrible coping strategies in the coming episodes.

Sasha will spin out thanks to everything that’s happened and will continue to happen with Michael.

As for Chase, he’ll get an offer from Hamilton Finn (Michael Easton). Whether that involves an offer to tell Willow the truth or perhaps a distraction from all the drama, Chase won’t be interested. General Hospital spoilers say Chase will turn down Finn’s offer, but will he really be able to stand by and let Willow marry the love of his life?

There have been some hints that point to Chase potentially stopping this wedding and coming clean, so we’ll see how it all plays out. This would be a great opportunity for Chase to offer himself as an alternate groom.

However, it doesn’t really matter since Willow and Michael will indeed make it official. They’ll go into this custody battle as a married couple, but Nelle won’t take this lying down.

General Hospital spoilers say Nelle will overhear some leverage that she can make work for her. Once Nelle listens in on Brook Lynn Quartermaine’s (Amanda Setton) discussion with Julian Jerome (William deVry).

Nelle will have ammunition she can use against Julian. She’ll learn Julian’s baby switch cover-up involvement and put him in a tight spot as a result.

GH fans can expect Julian to face Nelle’s ultimatum. Julian will have to do exactly what Nelle wants if he expects to keep his secrets from Lucas Jones’ (Ryan Carnes) ears!

Nelle will want Julian to testify for her, but that may not be the extent of her requests. Will Nelle also want a new husband to offset marriage power move?

That’s certainly an option to consider since General Hospital spoilers say Nelle will try to even the odds. Over with Carly Corinthos (Laura Wright), she’ll express great admiration for Willow. Carly will be grateful to have a new daughter-in-law who’s so devoted to Michael’s son.

This may be a marriage of convenience, but Carly will probably end up hoping it becomes true love! Of course, Wiley is the priority for now. Making sure Michael gets full custody is the goal, so that’s what everyone will be focused on.

After Chase makes a scene and potentially puts the plan in jeopardy, Carly will lash out at him. Chase will probably learn that Carly’s in the loop on the fake affair – and she won’t be happy about Chase’s apparent attempt to ruin things.

Next, Diane Miller (Carolyn Henessy) will help Michael with some final hearing prep. Once they’re as ready as they’ll ever be, Diane will get ready to fight hard and help Michael keep his son. Martin Gray (Michael E. Knight) will hope to come out swinging as well.

Nelle will make a memorable entrance before this trial kicks off, but no one should be surprised by Nelle’s theatrics.

Sonny might deal with Mike Corbin’s (Max Gail) inevitable death. As for Olivia, she’d certainly be upset if Julian married Nelle and gave Leo Falconeri (Aaron Bradshaw) an evil stepmother! There’s no guarantee that’s how it’ll play out, but Olivia will definitely battle concerns in the week ahead.