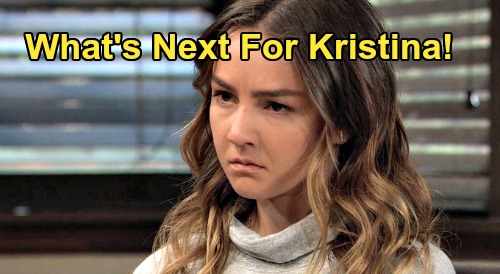 General Hospital (GH) spoilers reveal that one character hasn’t been getting a lot of airtime, but many viewers are hoping that’ll change. What’s next for Kristina Corinthos Davis (Lexi Ainsworth)? Kristina is the daughter of Alexis Davis (Nancy Lee Grahn) and Sonny Corinthos (Maurice Benard), so she needs to be an important part of the canvas. Here are three things that Kristina fans are hoping to see in 2020.

1) Kristina Should Fall in Love Again

Kristina’s love life has been pretty much nonexistent lately. It’s a shame since there are so many possibilities to pursue. Things didn’t work out with Parker Forsyth (Ashley Jones), but there are plenty of fish in the sea! Kristina needs to put her heart back out there and see if love might bloom again.

Before Brytni Sarpy (ex-Valerie Spencer) scored a contract role on The Young and the Restless, Valerie and Kristina seemed poised to truly fall for each other. They shared a surprising kiss and dealt with some complex feelings afterward, so it would’ve been an interesting story to pursue.

Unfortunately, that didn’t pan out after GH recast the role of Valerie. Paulina Begumbe is a perfectly fine actress and works as a detective, but she’s never really felt right for the part. The chemistry between Valerie and Kristina was no longer there, so it’s not surprising that General Hospital ditched that whole plan.

Even so, Kristina could always fall for someone else on canvas or perhaps a new character. Whether she finds love with a man or a woman, new love for Kristina would be welcome! It’s definitely on the list of things Kristina fans are rooting for.

Since Kristina has dropped off the map for the most part, she never gets to spend much time with her family. It’d be nice to see Kristina catch up with her mom and sisters more often. Alexis, Sam McCall (Kelly Monaco) and Molly Lansing Davis (Haley Pullos) would undoubtedly like to see Kristina on a regular basis.

There’s also the Corinthos side of things. General Hospital doesn’t include Kristina in with the rest of the Corinthos clan as much for some reason, but they should! Kristina is part of the family, so there’s no reason for her to be excluded from the drama.

Kristina was a huge part of the Shiloh Archer (Coby Ryan McLaughlin) storyline, which did her character no favors. The story only made Kristina look gullible and dumbed down. Now that Kristina has overcome that dark period of her life, it’d be nice to see her settle into a solid career and find some success.

That love interest we mentioned could be part of the equation, but any kind of story could be good as long as it’s gripping and fits the character. Kristina was barely included in the Kendra Lennon (Michelle Argyris) chaos, but it’s just as well since that was kind of a mess, too. Let’s hope Kristina gets a storyline of her own in 2020!