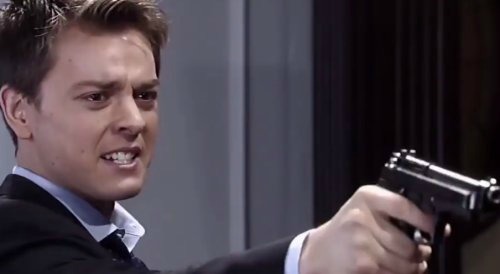 General Hospital (GH) spoilers tease that Michael Corinthos (Chad Duell) could be on the verge of making some major life changes. In a horrific attack that will soon air on GH, Michael is targeted down on the docks. Josslyn Jacks (Eden McCoy), Sasha Gilmore (Sofia Mattsson) and Laura Collins (Genie Francis) are also caught in that attack.

With that in mind, General Hospital spoilers tell us that Michael will be driven down a protective path. He’ll start by trying to break up with Sasha to protect her from his father’s enemies.

That breakup probably won’t pan out, but that just means Michael will have even more motivation to watch out for Sasha. That goes for his other loved ones, too. Could Michael leave ELQ and join Sonny to protect the family?

Just before the attack, Josslyn tells Michael he can’t die and leave her. Joss has already lost her brother, Morgan Corinthos (Bryan Craig), to a bomb meant for Julian Jerome (William DeVry).

Although Joss is concerned that Nelle Benson Archer (Chloe Lanier) might kill Michael, the attack will bring a different source of concern.

You can bet Josslyn will be rattled afterward, so Michael will want to keep her safe. Michael would do anything to protect his little sister.

Michael proved that by killing Claudia Zaccharra (Sarah Brown) years ago to stop Josslyn’s kidnapping. Michael could soon find himself feeling more determined than ever to stand against Sonny’s rivals.

Michael Wants to Protect His Loved Ones

General Hospital spoilers say Michael will want to protect his loved ones, especially since both Sonny and Jason are out of town. Could Michael decide that since Sonny is distracted, he needs to step up and deal with the mob issues?

Michael knows that Sonny’s worried about Mike Corbin (Max Gail) and could be off his game. However, Michael is a bit distracted as well lately by Nelle.

Michael’s been doing his best to take care of “Wiley Cooper Jones” (Theo and Erik Olson), which has become harder thanks to Nelle’s parole. If Michael wanted to take over the mob issues, would he be any less distracted than Sonny? Maybe not, but Michael might feel like he has to do something!

Could Michael Take Another Route?

Laura is hoping to renovate the waterfront properties, but Michael doesn’t want to mess with his father’s piers. Of course, Laura protests this idea right before the attack.

Now that Sonny’s legitimate business has also been under fire, will Michael change his mind and want to renovate the entire waterfront? Will Michael risk upsetting his father’s business to make the waterfront property safer?

Some General Hospital fans feel like Michael has become a stale character. Michael joining the mob and fighting for his family could breathe new life into the role. It might give Michael a much-needed edge. Will we see this change in Michael? Will Sonny allow Michael to help now that he’s an adult?