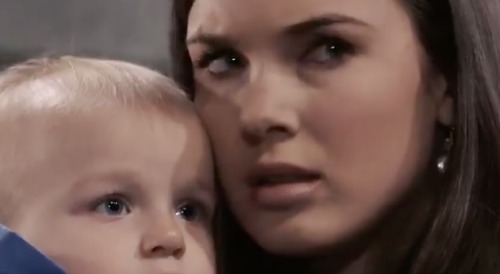 General Hospital (GH) spoilers tease that Willow Tait (Katelyn MacMullen) will share a tender moment with Lucas Jones (Ryan Carnes). GH fans know Lucas got on board with Brad Cooper’s (Parry Shen) plan to leave Port Charles. Although Lucas appreciates the help Brad received while he was in a coma, he wants to focus on their little family – just two dads and “Wiley Cooper-Jones” (Erik and Theo Olson).

Willow already received updates from Nelle Benson Archer (Chloe Lanier), but she’ll get confirmation from Lucas himself on Monday, February 17. Lucas will understand this is hard for Willow since they’re moving all the way to Portland.

Willow can always pay them a visit, which is what Lucas will surely point out. He won’t want Willow fretting about “Wiley” forgetting her. Lucas intends to make certain “Wiley” knows who brought him into this world and how much she wanted to keep him safe.

Willow has always done everything in her power to protect “Wiley” from Shiloh Archer (Coby Ryan McLaughlin) and that horrible cult lifestyle. As difficult as this goodbye will be, Willow will take comfort in knowing that “Wiley” will have a fresh start with his adoptive parents. Her goal has always been for “Wiley” to have the best life possible.

That’s why it’s going to be devastating when Willow realizes Wiley had no life at all. Her true son took his last breath in Brad and Lucas’ apartment shortly after arriving home. General Hospital fans will recall how panicked and desperate Brad was, but it was no use. Wiley was gone, and the baby swap went down soon after.

Brad switched dead Wiley for Jonah Corinthos and things have been a nightmare for him ever since. It’ll be Willow’s turn to face a nightmare after “Wiley’s” real identity is exposed.

Harrison Chase (Josh Swickard) will deliver some awful news following Nelle’s shocker. It sounds like Chase will have to be the one to break Willow’s heart.

Willow has always felt so deeply connected to “Wiley.” She once noted that “Wiley” didn’t look like Shiloh or even her for that matter. However, Willow didn’t really think much of that. There were never any red flags, clues or gut feelings to make her suspect “Wiley” wasn’t her own.

As a result, Willow’s going to be completely blindsided. General Hospital spoilers say there’ll be plenty of tears over the son Willow lost twice over. She’ll have to mourn the Wiley who died as well as the one who was never hers to begin with.

Chase will undoubtedly wrap Willow in his arms and give her all the love he can. She’s going to need it as she struggles to heal from this crushing blow. General Hospital spoilers, updates and news are heating up, so check CDL often to make sure you don’t miss any GH info!