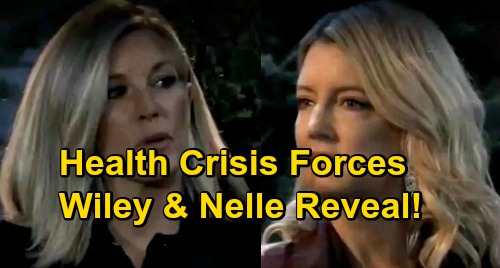 General Hospital (GH) spoilers tease that some big surprises seem to be in store for Nina Reeves (Cynthia Watros) in the coming weeks. As GH viewers know, it seems to be pretty clear at this point that Nelle Benson Jerome (Chloe Lanier) was Nina’s long-lost daughter, which would make Wiley Quartermaine Corinthos (Erik and Theo Olson) Nina’s grandson.

Nina can’t ever know her daughter now that Nelle’s dead, but she could certainly be a part of Wiley’s life – that is, if Nina ever finds out the truth.

Well, one way or another, the truth’s going to come out, but one wonders how it will happen. After all, it seems that Carly Corinthos (Laura Wright) is determined to keep Nina in the dark.

As GH viewers will remember, Carly suggested to Jasper “Jax” Jacks (Ingo Rademacher) that he actually run interference as Nina continues the search for her daughter…to make sure that Nina never finds out the truth. Jax and Carly are afraid that the truth would devastate Nina.

And for Carly, she might be thinking on her own accord that Nina might stake some claim to Wiley if the truth were to come out. Wiley’s a sweet boy, and it would make sense that Nina would want to get to know him, but you never know.

Nina could get in a mood and decide that Wiley would be better off with her than with Michael Corinthos (Chad Duell) and launch some sort of custody suit.

Carly has probably thought all this through, and she’s likely concluded that it would behoove her family if Nina never knows the truth. And given how difficult the daughter search is going to be for Nina from here, there’s the real possibility that Nina could never know that Wiley is her flesh and blood.

But then again, secrets usually come out eventually, so something’s going to have to give at some point.

What if Wiley has some sort of health crisis down the road? He already has a heart problem that will require a second surgery fairly soon. Something could happen during the surgery requiring, for example, a blood transfusion that could lead to the truth coming out.

Perhaps Wiley will have a rare blood type and need blood from a relative.

If Michael’s side of the family doesn’t turn out to be compatible as donors, then Carly and Jax might have to spill the truth about Nina being Wiley’s grandmother so she can be tested.

That’s going to be an uncomfortable conversation to have for sure, but if Wiley’s life is on the line, then Carly and Jax will probably feel like they have no other option.

It will be interesting to see exactly how the truth about Nelle being Nina’s daughter is going to come out in the end. Do you think that a Wiley health crisis might be the undoing of Carly and Jax’s secret?

Stay tuned to the ABC soap and don’t forget to check CDL often for the latest General Hospital spoilers, daily episode recaps, and news. We’ve got you covered!