General Hospital Spoilers: Will Elizabeth Cheat With Nikolas – Gets Even With Franco For Sleeping With Kim? 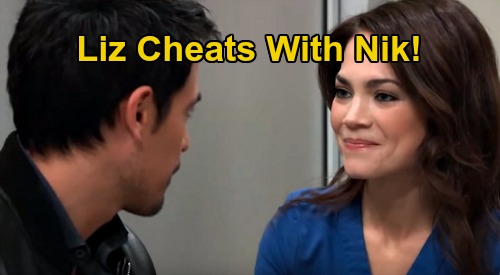 General Hospital (GH) spoilers tease that Ava Jerome (Maura West) seems to really have the upper hand right now. As GH viewers know, Ava is currently married to Nikolas Cassadine (Marcus Coloma), and they have a rather bizarre post-nuptial agreement – if either of them cheats during the marriage, then the other gets the Cassadine fortune. And that has set Ava on a mission to subtly push Nikolas in the direction of Elizabeth Baldwin (Rebecca Herbst).

Ava’s also been causing troubles in Elizabeth’s marriage to Franco Baldwin (Roger Howarth) by arranging a big soiree at Wyndemere to celebrate Franco’s portrait of her.

Ava has played up Franco’s disturbed past as a selling point for the soiree, and Elizabeth doesn’t appreciate it. But Franco doesn’t see it as being a big deal, and that’s led to friction between him and Elizabeth.

Well, we can’t help but notice that it hasn’t taken much for Elizabeth to get pretty miffed at Franco over the whole thing and to turn to Nikolas for support. And that’s got us wondering if maybe there’s something else going on here.

Could Elizabeth still be harboring some negative feelings about the fact that Franco slept with Kim Nero (Tamara Braun) when he thought he was Drew Cain (Billy Miller)?

Of course, Franco really isn’t to blame for that whole episode, since he wasn’t in control of his own body at the time, and Elizabeth knows this intellectually, but emotionally it’s got to be hard to know what happened between Franco and Kim.

Perhaps Elizabeth isn’t even consciously aware of her feelings deep down, yet that’s what’s propelling her to rekindle her friendship with Nikolas and turn away from Franco as she has.

Let’s face it, Elizabeth has been pretty chilly toward Franco lately, and she gave him a really hard time as he tried to apologize for an insensitive crack that he made about her artistic abilities. And at the same time, Elizabeth has been softening toward Nikolas and letting him into her life little by little.

Could we be looking at the beginning of a real relationship between Nikolas and Elizabeth? Elizabeth certainly doesn’t seem like she’s aiming to cheat right now, but maybe deep down she wants to get even with Franco!

Could Elizabeth subconsciously want to cheat with Nikolas, perhaps to get even with Franco for his affair with Kim? That could explain why Elizabeth is pulling away from Franco and getting closer with Nikolas.

Who knows – Ava might get her wish and Nikolas could end up cheating with Elizabeth – and if they do cheat, then Nikolas would probably have a hard time keeping it from Ava, given her friendship with Franco.

We’ll see what happens here, but when the new GH episodes left off, it seemed like Elizabeth and Nikolas were inching closer toward a more intimate relationship, while Elizabeth and Franco were being driven farther apart.

Do you think that Elizabeth and Nikolas are headed for an affair? Stay tuned to the ABC soap and be sure to keep CDL at the ready so you don’t miss any of the latest General Hospital spoilers and news.