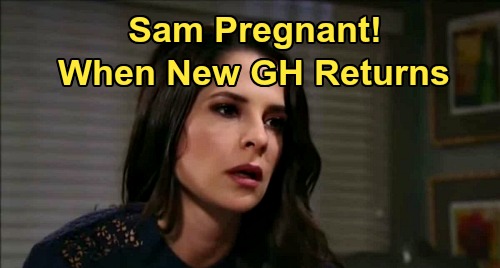 General Hospital (GH) spoilers tease that Maxie Jones (Kirsten Storms) will eventually get confirmation on her bun in the oven. Maxie realized she might be pregnant in the final episode before the shutdown, so GH fans are eager to see what’s next in this hot storyline. Once new episodes hit the screen again, Maxie can pay a visit to her doctor and get a pregnancy test to confirm her suspicions.

Will Maxie be the only one who winds up pregnant in the months ahead? A pregnancy storyline for Molly Lansing-Davis (Haley Pullos) can’t be ruled out just yet, but maybe we should consider other options.

After all, Molly was probably quite careful about birth control, and there are many other ways for the truth about her hookup with Brando Corbin (Johnny Wactor) to come out.

Instead, it might be nice if Maxie had a friend who could go through this experience with her. Sam McCall (Kelly Monaco) and Jason Morgan (Steve Burton) have been forced apart by difficult circumstances, but that’ll change sooner or later.

In fact, General Hospital spoilers before the shutdown pointed to a new plan – one that could help Sam eliminate both obstacles standing in her way.

Of course, those obstacles are Sam’s parole officer dilemma and this dangerous Cyrus Renault (Jeff Kober) situation. As soon as Sam and Jason can take care of those issues, they’ll finally have the freedom to be together again. You can bet Jason and Sam will hit the sheets in celebration soon after.

Jason and Sam might even sneak in a steamy bedroom session in the meantime. We all know these two typically can’t stay away from each other for long. What would happen if Sam got pregnant as a result of sleeping with Jason under the radar?

It wouldn’t be so under the radar anymore! Sam would be left to lie about the father or face the consequences of surrendering to forbidden love.

Then again, GH could stick with the celebratory route and just have Sam get pregnant after this nightmare’s over. It’d be a great way to kick off a new “JaSam” chapter.

In an interview with Soap Opera Digest not too long ago, Kirsten Storms talked about how much she loves working with Kelly Monaco and wishes she could do it more often. Giving them both baby stories might help!

Could Sam get pregnant next? Would you like to see Jason and Sam add one more child to complete their family? We’ll pass along updates as other GH news becomes available.