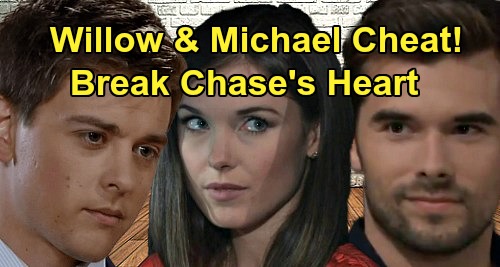 General Hospital (GH) spoilers tease that Willow Tait (Katelyn MacMullen) could be on the verge of spinning out and making a massive mistake. GH fans know Michael Corinthos (Chad Duell) wants Willow to stay in Wiley Corinthos’ (Erik and Theo Olson) life. He insisted that Wiley needs her before adding that he needs her, too.

Sasha Gilmore (Sofia Mattsson) later said the same thing in a separate chat, but Willow remained reluctant. She just feels it’d be too painful all around, but Michael probably isn’t going to give up. He doesn’t want to be pushy, but he realizes how much Wiley means to Willow. Shutting the kid out is undoubtedly going to hurt worse than being there for him.

General Hospital spoilers say Willow will continue to struggle in the coming weeks. It’ll be hard for Willow to adjust to her new normal, so Harrison Chase (Josh Swickard) will turn to Michael for help. He’ll likely feel like due to Michael’s shared experience with Willow, Michael can get through to her in ways he can’t.

This is interesting because we’ve got Sasha pushing for Willow to stay in Michael’s orbit. We’ve also got Chase encouraging it, so this seems like the prime cheating scenario. Neither one of them suspects Michael and Willow would ever cross that friendship line.

Of course, Sasha and Michael’s upcoming conversation could be a game-changer. They’ll have an emotional discussion during the week of March 9-13, so that could point to a split or at least a break.

It’s possible Sasha will want to take a step back and decide if she’s all in with Michael and Wiley. She could do that by taking herself out of the picture and handling expansion plans in Italy. That’d leave Michael feeling down about losing his love – potentially for good.

Meanwhile, the emotional distance should grow for Chase and Willow. She’s feeling awfully vulnerable, so she could easily make a move with Michael. If they’re both struggling, it’s easy to imagine them caving in and cheating.

Michael and Willow are both portrayed as such great people, so it’d be nice for them to screw up a bit here. No one is perfect, especially on a soap! General Hospital spoilers suggest Michael and Willow will probably become a couple down the road. Will that kick off with a betrayal? Will Chase wind up stunned and heartbroken?

It sounds like some exciting GH drama’s looming, so stay tuned. Don’t miss all our updates at CDL. You can always find hot General Hospital spoilers and news daily.