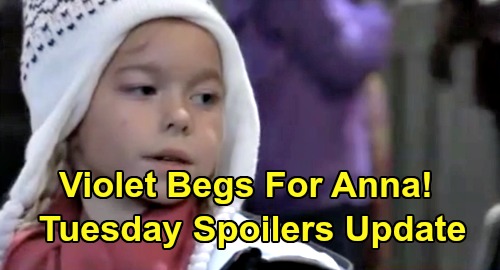 General Hospital (GH) spoilers update for Tuesday, March 3, teases that Julian Jerome (William deVry) will accuse Brook Lynn Quartermaine (Amanda Setton) of bluffing. Of course, Brook Lynn will fire back that Julian should try her! She won’t be afraid to spill Julian’s secrets to Sonny Corinthos (Maurice Benard), so Julian will have no choice but to deliver on his promise.

Linc Brown (Dan Buran) is trying to score Brook Lynn’s shares for Valentin Cassadine (James Patrick Stuart). They have an arrangement, but Julian will enter the mix and cause problems. He’ll punch Linc in the gut and do his best to send a clear message. Julian will undoubtedly want Linc to let Brook Lynn out of her contract and walk away while he still can.

Naturally, this is more than Linc anticipated when he signed on to help Valentin. At some point in Tuesday’s episode, Linc will voice his complaints. It looks like he’ll wiggle out of their deal, but he’d be wise to follow Valentin’s orders. After all, Valentin can be just as dangerous as Julian!

Other General Hospital spoilers say Ned Quartermaine (Wally Kurth) will hope for answers. Over the phone, Ned will be frustrated when he doesn’t get the info he needs.

There’s a major threat to ELQ, so Ned’s counting on finding out who’s behind it. GH fans already know Valentin’s responsible, but we’ll see how long it takes the Quartermaines to figure that out.

In the meantime, Michael Corinthos (Chad Duell) will make a big decision about ELQ. He’ll take a leave of absence so he can concentrate on Wiley Corinthos (Erik and Theo Olson) for now.

General Hospital spoilers, news and updates say Michael will seek support from Ned. He’ll most likely want Ned to steer the ship while he’s in Daddy mode, but that could lead to trouble soon enough.

Next, Peter August (Wes Ramsey) will feel backed into a corner. He’ll feel like he has to be at least somewhat honest with Maxie Jones (Kirsten Storms) or else his charade will fall apart. Maxie will focus on how important honesty is to her. She won’t think they can have a relationship unless they tell each other everything.

Peter will decide to confess the accusations against him. He’ll note that Robert Scorpio (Tristan Rogers), Jason Morgan (Steve Burton) and Sam McCall (Kelly Monaco) all think he’s a guilty killer. Peter will fill Maxie in on their suspicions regarding Drew Cain’s (Billy Miller) presumed death as well as the attempted attacks at GH.

Maxie views Peter as a hero, but Robert and “JaSam” have a very different perspective. They believe he plotted to kill Andre Maddox (Anthony Montgomery) and Franco Baldwin (Roger Howarth), which Maxie will obviously think is crazy talk. She’ll want exonerating proof to get them off Peter’s back, but that’s a tough task since he’s indeed to blame.

After mulling it over, Peter will determine that he has to pin his crimes on someone else. He’ll think a scapegoat is the answer, but that may create more issues instead.

As for Hamilton Finn (Michael Easton), he’ll bump into Anna Devane (Finola Hughes) and face questions about his recent chat with Harrison Chase (Josh Swickard). Anna will be curious what Finn actually told his brother – meaning about their relationship status.

General Hospital spoilers say Anna will hope there’s still a chance for them. She’ll want to put their Peter conflict to rest, but how can they when nothing’s been resolved? Regardless, it seems Violet Barnes (Jophielle Love) will want Anna to stick around on Tuesday. She’ll apparently push Finn to make Anna stay, so Violet’s rooting for “Fanna.”

Things are heating up in Port Charles, so don’t miss the hot drama ahead. We’ll keep you posted on all the latest GH details. CDL’s the place to be for exciting General Hospital spoilers, updates and news.

“You dropped your bomb. You can go now.” #GH pic.twitter.com/3fGxNPogQR