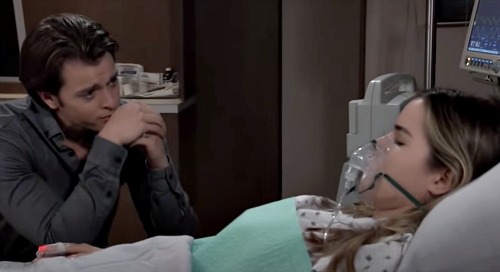 General Hospital (GH) spoilers tease that Michael Corinthos (Chad Duell) and Willow Corinthos (Katelyn MacMullen) will have a lot to discuss in the days to come.

As GH viewers are aware, Michael and Willow finally decided to become a real couple after months of slowly developing feelings for each other. Michael and Willow decided that they didn’t want an annulment and they made love, each happy to take their relationship into the future.

But then the truth about Harrison Chase (Josh Swickard) and Sasha Gilmore’s (Sofia Mattsson) faked affair came to light. Willow and Michael each learned about the phony affair after Sasha overdosed on Cyrus Renault’s (Jeff Kober) drugs.

But it’s also true that Michael and Willow have been falling in love, which makes this situation über complicated. According to GH spoilers, Willow and Michael will have a sit-down in the next few days to evaluate what they want to do about their marriage.

That doesn’t sound so good, and it’s quite likely that Michael and Willow may realize that the only reason they were together was because of deceit – something that just doesn’t feel right.

We could see Michael and Willow decide to go ahead with the annulment – or perhaps with a divorce, now that they’ve consummated the marriage.

Now that they know that Chase and Sasha never slept together and that the latter faked an affair for the sake of Wiley Quartermaine Corinthos (Erik and Theo Olson), Michael and Willow might feel that they owe it to Sasha and Chase to go try to work things out with them.

But there could be a big wrinkle in Michael and Willow’s plan if they do decide to cal it quits. Since Michael and Willow slept together, there’s the very real possibility that Willow could wind up pregnant out of the deal.

It’s entirely likely that Michael and Willow could have divorce plans barreling ahead and that they choose to reunite with their exes.

Of course, that wouldn’t be an easy road, since Chase and Sasha were involved in such a big lie. Willow and Michael will probably have their fair share of anger toward Chase and Sasha over the fake affair scheme, but their respective relationships were strong before the big lie ruined things.

It might take a few weeks, but we could see Chase and Willow work things out, along with Michael and Sasha.

But that would be just about the time when Willow could be realizing that she’s pregnant. And that could leave both Chase and Sasha reeling from the fact that their big plan resulted in the very thing that’s going to ruin their reunions with Willow and Michael.

It would certainly be a big mess if Willow were carrying Michael’s child when she’s back with Chase. It would be a major situation for the quad.

We’ll see what happens here, but a Willow pregnancy would certainly throw some major drama into the situation between the group of four former friends.

Michael and Willow would have another child on the way, and that could be the very end of the road for both Michael/Sasha and Willow/Chase.

Do you think we’ll see Michael and Willow end their marriage only to discover that Willow’s pregnant with Michael’s baby? Stay tuned to the ABC soap and remember to keep CDL at the ready for the latest General Hospital spoilers, daily episode recaps, and news.