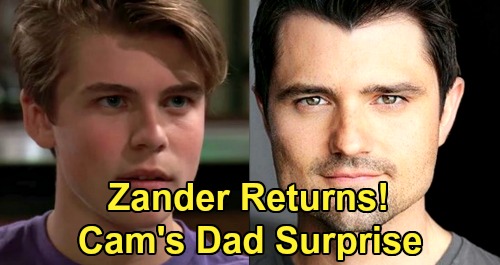 General Hospital (GH) spoilers reveal that a forgotten character mention is shaking up the soap world. Many GH fans were surprised when Cameron Webber (William Lipton) brought up his father, Zander Smith (Chad Brannon), during a deep conversation. He opened up to Trina Robinson (Sydney Mikayla), who was left with questions after her own dad’s recent death.

Marcus Taggert (Real Andrews) won’t be around to answer anything for Trina, so Cameron could relate to that. He mulled over his own circumstances and he wished he could’ve gotten to know his father. Cameron spent a good chunk of time describing his feelings and reflecting on how much he didn’t know.

It felt significant for GH to devote this much airtime to discussing Zander out of the blue. Where are General Hospital writers going with this? There are some interesting options to consider. It’s possible they were just using this to pull Trina and Cameron closer, but it felt bigger than that.

After all, there are many other ways to write a bonding scene. It didn’t have to be all about Zander. Plus, they highlighted the fact that Cam has questions. Would GH bring that up if they didn’t intend to provide answers at some point? Cameron could ask Elizabeth Baldwin (Rebecca Herbst), but he may not get very far since she apparently hasn’t told him much in all these years.

Zander died off a gunshot wound onscreen, but does that really matter in the soap world? After the way GH explained the whole Jason Morgan (Steve Burton) and Drew Cain (Billy Miller) memory-mapping twin situation, most of us can agree that anything goes! With that in mind, it’s certainly possible that General Hospital will somehow bring Zander back from the dead.

Cameron may have provided another hint about that through the dialogue. He noted that Liz and Zander were in love once upon a time, which many viewers took issue with. It was a one-night stand, not some epic love story. This could be General Hospital’s attempt to rewrite history a bit and set Zander up as a romantic rival for Franco Baldwin (Roger Howarth) – at least if Zander indeed returns!

There’s one more piece of evidence to ponder and it comes straight from a reliable GH insider. We’re hearing that General Hospital may have plans to recast a character of the past. It makes considering that’s how the current regime seems to roll.

It was easier for the audience to accept a new Nikolas Cassadine (Marcus Coloma) and Brook Lynn Quartermaine (Amanda Setton) than if they’d been brand-new roles. They had Port Charles connections right off the bat and could jump into stories quickly. General Hospital spoilers, news and updates suggest those recasts worked out, so maybe GH is going for another one.

Will Zander Smith be the next recast to hit town? It would definitely be a back-from-the-dead bombshell, so we’ll see how it goes. As other updates and news emerge, don’t miss all our General Hospital spoilers here at CDL.