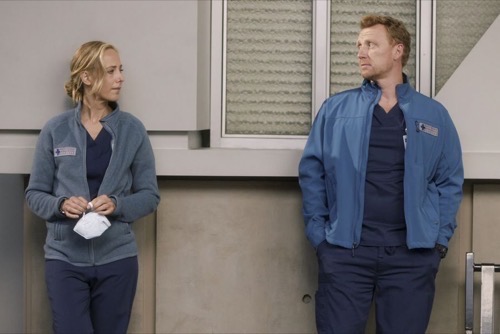 Meredith woke up. The experimental treatment she was on had helped her with her Covid-19 symptoms and now she was doing better. She was even eager to leave the hospital. She was a horrible patient and more than ever she wanted to see her children. She hasn’t seen her children in a week since she fell into a coma.

They weren’t told there was a problem because no one wanted to scare them and so they were being typical children who thought they couldn’t see their mother because she was working too hard. Meredith’s children were lucky. They had their aunts looking out for them and so they didn’t experience the full trauma of what the pandemic is like. And the most they focused on was their homework, but that was is it.

Meredith’s children were otherwise fine. Meanwhile two girls were brought to the hospital. The girls had just been saved from a house fire where they were being held captive and so they needed to be treated for smoke inhalation as well as trauma. The girls’ story was told to their doctors. The doctors were doing their vest best to help them and to treat their injuries.

It turns out the girls had started fire. They heard a commotion outside and they started the fire to draw attention and it worked. They were rescued. They thought that would be the end of it and unfortunately the drama didn’t end there. The girl whose name is Jada was dealing with the fact that her mother was arrested. Her mother had demanded the kidnapper be arrested and so a jerk officer arrested her.

It didn’t have to go like this. The woman didn’t know put her hand on the officer because she was stopped before she could and he still arrested her anyways for being a black woman to demand justice. If the girls had been white, the officer would have cared more. The officer and his friends also arrested several firefighters who was just trying to support the mother and so it turned into a huge thing.

It also served to further traumatize Jada. Jada and her friend Shaunice blamed themselves for getting kidnapped. They had received messages from a girl claiming to be an Influencer and so they stuck outside to meet her. Which delivered them straight into the hands of their kidnapper.

The same kidnapper was being brought to the same hospital. The doctors didn’t want to scare the girls and so they were being transferred to a room upstairs where they didn’t have to see their kidnapper again. They were safely there by time the kidnapper arrived. The kidnapper was demanding a lawyer and he wanted the handcuffs off of him. Only no one was paying that much attention to him.

They just wanted to treat him and hand him over to the cops. It was as he was being rushed into the hospital that a familiar face arrived. A woman who had been selling a teenage girl into sexual slavery had recognized the kidnapper and she wanted to be in the hospital near him. She also was wearing a mask which made it harder for people to recognize her face.

This woman had claimed a young girl was her niece when she was actually her victim. DeLuca had figured out pretty quickly that this woman couldn’t be trusted and he helped rescue the girl. He therefore would remember the aunt if he could have just seen her without the mask. However, the pandemic made things harder on everyone. The mask hid this woman face and the hospital was at capacity.

Everyone was busy. They were all trying to deal with patients and the woman was only at the hospital because of the kidnapper. The same kidnapper that seemingly suffered a stroke. He had the stroke as he was trying to claim those girls burned down his house for no reason and it happened while he was complaining about Owen. Owen told this guy what he thought of him.

Owen didn’t like kidnappers. His sister was taken hostage by men like this kidnapper and so Owen thought all men like that were going to burn in hell. It just didn’t stop Owen from treating the guy. He brought Bob to Amelia and Amelia said she was helping the man live long enough to rot in prison. The two doctors worked on Bob. They brought him to the OR and they talked.

They didn’t realize how crazy the world was until they had kids. They now have to protect their kids from men like Bob and they also have to protect from themselves because the kids that were partying it up were still just kids. They were dumb kids. They should be allowed to survive their mistakes and that wasn’t a given anymore.

The thing with the girls scared everyone. It made Maggie think. It did the same for Amelia and Owen. It even did it for Jackson. Jackson used his money to make sure Jada’s mother got out of prison and so Jada was reunited with her mother. She really needed her right now. Her father was out of town and her mother was the only person she could turn to after such an ordeal.

There was also the pandemic that was still going on. Teddy had an episode where she just snapped. Richard had to talk to her because Bailey was still grieving the loss of her mother and was taking break. Richard was therefore in charge. He told Teddy that she was going through it alone because she did this to herself and she has no one else to blame.

Teddy ruined her relationship with Owen. She cheated on him rather than work on the relationship or at the very least tell Owen she didn’t love him anymore and so she has no one to blame but herself. She shouldn’t be taking that frustration out on other people. She also couldn’t turn to Koracick. Koracick was dealing with Covid-19 because he got sick and so the only person he felt like talking to was Meredith.

The two bonded over being sick together. They even discussed how much Koracick hated being around people that were just dying and so he was vulnerable around Meredith. He was later escorted back to his room because the doctors wanted to keep Covid patients separately, but the one other thing they also both mentioned was how much they miss being doctors.

Meredith got to be a doctor again when she was the first person to respond to someone flatlining. She did compressions on this other woman until backup arrived and so she was going back to her own hospital bed when she passed out. Meredith’s lungs weren’t doing as great as everyone thought it was. She needed to be punt on a vent and so Richard agreed to put her on one.

Teddy meanwhile found Owen and she finally told Allison as in her friend Allison was more than just her best friend. The two of them were lovers. They were cheating on Allison’s girlfriend together and then Allison died on 9/11. Teddy named her own daughter after Allison, but she hadn’t told Owen why the name was so important and so he laughed when he found out he never really knew her.

DeLuca also ended up spotted the aunt and he told his sister to call the cops while he followed the aunt.

Maggie hadn’t been at the hospital when Meredith got put on the vent. Only she was at a hotel and she had been surprised by her boyfriend who said he was done with the whole long-distance thing. And now the two are together again.