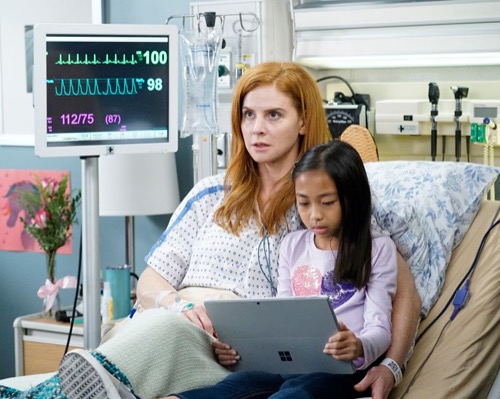 Bailey checks in on Joey, a foster kid that Ben brought into Grey Sloan. Meanwhile, Amelia is getting the results of her paternity test and Jo confronts her about how she is treating Link.”

The Pac North Hospital has been sold. Catherine and Richard got into a fight and so she later purchased his hospital. The fight between them had been that bad. Catherine added the hospital to the rest of her portfolio and to make things worse she now wants doctors at Pac North to re-interview for their jobs. They each had interviews with Koracick. This means Richard, Owen and even Maggie have to sit with Koracick and convince him to let them keep their jobs. And the doctors were dreading it.

Richard most of all. He didn’t know what Catherine’s plan was and so he had been surprised when he did later sit with Koracick. Koracick told him that he was wanted back at Grey Sloan. He also said that Catherine brought a crappy hospital because she wanted Richard back where he belonged and so surprisingly that upset Richard. Sure, he wanted to go back to Grey Sloan. He also wanted to do it on his own terms and not his wife’s. He told Koracick to tell Catherine to go to hell. He wasn’t going to be manipulated and so Richard was staying at Pac North even if it killed.

Catherine, it seems had had several favorites she has earmarked for Grey Sloan. She wanted Maggie back along with several doctors that had been fired by Bailey and so it was up to Koracick to “move” the doctors to areas where they were needed. He did the same with Maggie. Maggie went back to Grey Sloan and she suddenly found herself working for Teddy. Not that Teddy was there that day because she had two sick kids on her hands. Teddy was at home because of it and so Maggie had to keep in touch with her new boss as she went back to doing what she loved.

Maggie wasn’t like Richard. She wasn’t too proud to come back and she was glad for the chance. Koracick should have “interviewed” Owen right after her. He should have finished with the attendees before he moved on with the residents and yet Koracick couldn’t help sticking it to Owen. Owen got Teddy. They were engaged and so Koracick promised to be done with Owen by time for his wedding. He was off playing mind games with Owen while Amelia was waiting on her paternity test.

Amelia left Owen when she found out he was going to be a father. She broke up with him because she knew he wanted to be a part of his baby’s life and so its odd now that Amelia hasn’t told Owen about her own baby. He could be the father. He has a right to know and things with Linc were off. Linc told her he loved her. He also said he wasn’t going to get involved if the baby was Owen’s because he didn’t want to be the lone person out. He knew she and Owen had history and he wasn’t going to stand in the way that if it does turn out Owen is the father.

Speaking of fathers, Dr. Cormac Hayes brought his two kids to work with him. Their school was having a Parent-Teacher Conference and so the kids were basically roaming around the hospital when they weren’t exasperating their father. Hayes laughed about with Meredith. They were both parents and they knew it was like when time just got away from them. Meredith didn’t have that connection with DeLuca. DeLuca was still young and, while he tried to be there for Meredith’s, her kids don’t really want him.

DeLuca also wasn’t a noteworthy doctor in his own right. He had to use Meredith’s name to a hotshot diagnostician to come to see his patient and she wanted to leave the moment she realized she wouldn’t be working with Meredith. DeLuca was able to convince Dr. Riley to stay because of the patient. They were helping a single mother. Suzanne has two kids and her sister was trying to help to no avail. Her sister even outed her daughter without realizing it. Suzanne needed to get back to her kids and the doctors could find out what was wrong.

Dr. Riley ultimately said they should take Suzanne off her medication. They needed whatever dormant reactions to present themselves or else they were never going to figure out what was wrong with her and so Riley asked DeLuca to take a risk. He had to decide what to do next. He also had to do without his interns because they had been called away by Schmitt. Schmitt put together a lovely dance floor for his patient who was dying of cancer and so his friends were there to help him. They all watched as a dying old woman got to dance one last time with her husband and Meredith realizes she would have done that for her patient before.

Meredith would have given a dying woman dance floor. She just didn’t think of it this time around because things with DeLuca were still off and he meanwhile has made his decision. He talked Suzanne into coming off her meds. He and Riley watched as her symptoms presented themselves. They were doing that when Meredith, Bailey, Jackson, Owen, and Richard went to Koracick with demands. They demanded their old friends get their old jobs back and that Koracick finds the money for two joint heads of Cardio and Peds. And he agreed to it.

Only it doesn’t look like Alex is coming back because he’s ghosting his wife.