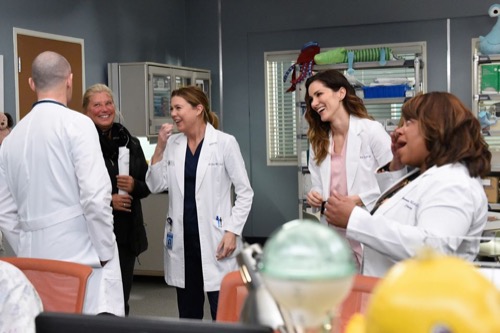 On tonight’s Grey’s Anatomy season 16 episode 15 called “Snowblind,” as per the ABC synopsis, “Meredith and Carina question DeLuca’s uncharacteristic behavior when he volunteers to perform a life-threatening task during a blizzard.

Meanwhile, Bailey tries to help Joey with his future, while Richard trains a new intern at the hospital.”

DeLuca wasn’t making smart decisions. He was taking risks he didn’t have to and his latest decision has left Meredith worrying for him. DeLuca agreed to go out into a blizzard so that he could collect a liver from another hospital. He said he was a skier and yet Meredith pointed out to him that he didn’t have his skis. He didn’t have anything to protect against the blizzard. It was the negatives out there and he thought he could walk to another hospital. One that was miles away. DeLuca wasn’t being rational and Meredith pointed that out to him.

She wanted him to question his decision. She thought if she points out the obvious that he would be forced to change his mind and he didn’t. DeLuca wanted to do something right. He heard Hayes’s patient was a seven-year-old girl who needed a liver transplant and so he agreed to go because he had something prove to himself as well as to Meredith. He knew why Meredith was questioning him. He knew that she thought he had inherited his father’s mental instability and so he went out into the blizzard to spite her.

People couldn’t see three feet in front of them much less the three miles it would take to get to the next hospital. The conditions he went out in weren’t viable and he could die. Meredith regretted letting him go. She informed Bailey what happened and she spoke to his sister Carina. Carina kept trying to get him on the phone. She didn’t have to give up until reached him and in the meantime, Hayes’s patient took a turn for the worse. The little girl coughed up blood. She was in and out consciousness.

Meredith stepped in to help Hayes. They were treating the little girl as best as they could and it was yet another moment to bring them closer together. Hayes cared. Meredith could see how much he cared about his patient and she respected him for it. They were saving lives while Amelia was staying home. Amelia didn’t want to deal with Link or his feelings and so she asked Koracick to cover for her. Koracick didn’t mind. He liked treating patients and so he didn’t see an issue while Teddy did.

Teddy was inquisitive about why Amelia stayed home during an emergency. She found out there was nothing wrong with the baby and so it was odd why Amelia was staying home. Teddy couldn’t get much out of Koracick. She also couldn’t get anything out of Maggie because Maggie was jittery and constantly on the move. The only time Maggie stayed in one place long enough was when she and Teddy treated an emergency patient. A pregnant woman came in after she was hit by a car. The car was apparently being driven by someone she knows and it was all a big accident.

The driver thought they were on the road. They were actually driving on the sidewalk. It was just too hard for her to see and so that’s another reason to be concerned from DeLuca. The other hospital called when DeLuca received the liver. That meant he was out on the street and that he was alright for now. It could take a turn for the worse as it did with the pregnant patient. She began crashing and the doctors were forced to perform a C-section to save her baby. The baby was born at thirty-two weeks and it was going to need all the help it could get.

DeLuca eventually arrived. He came back just as Hayes and Meredith were bonding over their dead spouses and DeLuca was also injured. He was suffering from frostbite. His hands were all swollen and blue. He needed medical intervention to save his hands. Jackson had to be called in. He was treating DeLuca as the other doctors dealing with the pregnant mother. She was dying and so was her baby. It was the worst time for Bailey to be showing off the hospital to young Joey. Joey was a kid living on the street and he didn’t think he’d have many prospects.

Bailey showed him around the hospital so that he could be inspired. Joey watched Owen bring the mother and baby back from the brink of death. It had been a victory for it. It was therefore strange when Teddy needed fresh air afterward and so it was a good thing Koracick went after her. Koracick asked her what was wrong. He found out Teddy suspected Amelia’s baby was Owen’s and that she was afraid Owen would go back to Amelia. And Koracick could have played on her emotions, only he didn’t.

He reassured Teddy. He told her that Owen loved her and that if it had been the case that he would have been the first person to say. Koracick was a good man. The rest of the hospital couldn’t see it because they had formed cliques and so Teddy assured him of. They even got to hang out afterward. They were throwing snowballs at each other when Schmitt found his patient. His patient Tess had wandered off and she was found pretending to be an intern. It turns out Tess was in med school when she got sick.

Tess has four bouts of cancer counting this latest turn. She was so sick of being sick that she wanted to forget how sad she was and pursue medicine like her original plan. Tess was caught out before she performed the surgery. She was also given a stern talking-to from Richard and the two of them bonded. Richard knows what it’s like to lose a dream. He revealed his hand tremor and its why he’s been so down lately. He was able to talk through his emotions with Tess and he told her not to give up. She should be a doctor if she wanted to be a doctor.

DeLuca came out alright. He lashed out Meredith this last time and he crossed a line. She walked away and she might never come back.

Teddy meanwhile confronted Maggie because she needed answers and Maggie basically told her suspicions had merit.

Teddy became so scared that she slept with Koracick to help her forget this situation with Owen.

And Bailey invited the teenager Joey to come to stay with her and her family.

And it turns out Alex never went home to see his mother, he lied to Jo because he left her and he wasn’t man enough to tell her to her face.

And now Meredith was missing her person, but it looks like Hayes might fill the void if he stays around long enough.