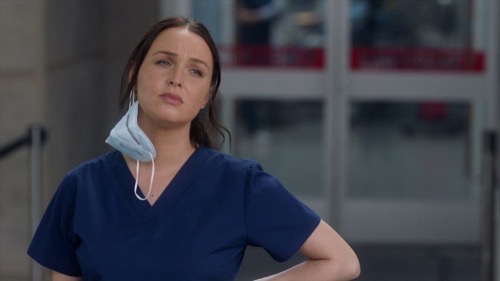 Koracick is put in charge of the interns who recently joined the hospital ranks and Link operates on a sex therapist. Elsewhere, Maggie finds comfort in Winston’s virtual presence.”

Grey Sloan Memorial Hospital received additional Covid-19 tests. The hospital can now test everyone at the hospital for the coronavirus and this couldn’t have come at a better time. One of their doctors caught Covid-19. Dr. Meredith Gray caught the virus after she had been treating patients with the disease for the past several weeks and in spite of all the measurements, she took to not get it.

Meredith was a chief concern for everyone. She was a staple at the hospital and she was found lying on the ground in the parking lot. Meredith was found in time. She was rushed back to the hospital as a patient and there she became one of the worst patients they ever faced. Meredith didn’t want to stay at the hospital. She wanted to be released. Her temperature wasn’t spiking nor was she suffering from any further dizzy spells and so she wanted to return to her hotel room. Meredith was staying at a hotel during the pandemic because she didn’t want to risk bringing the disease back home to her kids. Her kids were being watched by their aunt. They were watching tv and doing remote learning.

Her kids barely noticed she was gone. They were fine with their aunt and their honorary uncle. This meant Meredith could focus on her work. She volunteered to treat the Covid-19 patients and it was from them that she caught the disease herself. Meredith felt fine at the beginning. She even believed she could be released into her own custody and so the problems arose when Meredith tried to leave on her own.

Meredith collapsed when she tried to climb out of bed. She was found by DeLuca and her sister Maggie. Funnily enough, they were on their way to sign her out when they found her on the floor and so now they couldn’t release her. They had to treat Meredith as the patient she is. They ran some tests on her and they found some clouding in her lungs.

What Maggie saw had alarmed her. Maggie soon came to the conclusion that she couldn’t treat Meredith because she couldn’t separate the patient from her sister and right now she’s choosing to be her sister. Meredith’s case was reassigned to someone else. Meredith’s condition was bad and the only one who didn’t seem to realize that was Meredith herself. She was used to dictating to other people at the hospital.

She wasn’t used to be told what to do and so she was being very fun right now. Meredith had also been falling asleep a lot. She goes to sleep and she dreams of Derek. She tells him that she loves him. She misses him and he responds with his familiar smile as he said: “I know”. Meredith’s sleeping has become an issue.

Both Maggie and Amelia have talked. They want to know what will happen in case Meredith’s condition gets worse and Meredith isn’t telling them. She doesn’t want to go there. She sees Derek in her dreams and he’s telling her they can’t be together until she lets go of her worries for the kids. Meredith was holding onto life for her children. She didn’t want them to lose their second parent and so her position was a difficult one.

She wants to be with her kids, but she also wanted to be with Derek and so Meredith had to make a choice. She had to decide who she wanted to be with. Meredith’s illness had consumed her family and her friends unfortunately couldn’t slow down long enough to be there for her. The whole hospital was being overwhelmed with Covid-19 cases. Jo was taking over Meredith’s old cases and taking on new ones as well.

Jo’s latest patient was clear of Covid. Only she was pregnant and the pregnancy wasn’t attached to her uterus. It was attached to a liver. It was such a weird case that Bailey called dibs on it just so that she could study more and not have to pay attention to Richard. Richard had been named as the Chief of Chiefs. He gets to run the hospital how he sees fit and he was doing a better job than Koracick.

Koracick had been given control of the new interns. It was his job to help familiarize them with the hospital and he really wasn’t doing a good job. His interns were messing up all over the place. One guy was supposed to do discharges and he had needed a minute once he realized all the people on the screen were dead.

There was also a mother and daughter who were both interns this year. It was a miracle they both got matched to the same hospital and Koracick didn’t even want the story behind that. He just told them they had to go by nicknames now because he couldn’t call them both Ortiz. Koracick was so ill-suited for this position that it was clear to anyone that he would destroy the group of interns and he did.

Several of them quit after the first day. They hated working at a hospital during a pandemic and so it was just Mama Ortiz who surprised him. She stepped in where the others faltered. She basically took over and thankfully she was good at the job. She worked for twenty years as a social worker. She knew that the patients needed respect and care. And she wasn’t afraid to offer it.

This new intern was going to be a game-changer. It caused Koracick to second-guess himself and someone finally took the interns in hand. Richard didn’t even notice that there were issues with either interns or his Chiefs. Bailey worked on the ectopic pregnancy case. The thing about ectopic pregnancies that usually the baby isn’t viable and surprisingly this one was. The patient has been trying to have a baby for years.

The moment she topped IVF and left her husband, she got pregnant with a one-night-stand. Her baby was twenty-six weeks and so she was deemed viable. They performed C-section. They delivered the baby and then rushed the little girl into natal. And so it was the mother that concerned them.

The mother was at risk of losing her liver. She couldn’t exactly go on a list for one because times have changed and getting a liver would be nearly impossible nowadays and so Jo did her best to save the liver that was available. She and Bailey worked together to save the mother’s life. They were doing that while Koracick went to Richard and he told Richard that he wasn’t what the kids needed. Teaching them was a gift.

Richard was the best there was and so Richard had to be the one to teach them. Koracick realized this a few moments before he found out he contacted Covid-19 and so it was like being kicked while he was down. Koracick went home. He was going to be there for a while as he recovers from this and that was good news for Owen.

Owen still hated both Koracick and Teddy. He wasn’t speaking to them unless he had to and that’s why him delivering the news to Koracick was absolutely the worst. At least, Koracick had been right about Richard. Richard stepped up to teach the interns or what was left of them and his first decision was to bring them to an OR. It’s what he did for Meredith and Bailey once. It’s why they love him so much and why Meredith named Richard as her medical proxy. She wanted someone she knew would plug the plug. It couldn’t be her sister or her sist-in-law. It had to be Richard and he also promised to do everything possible to keep her alive first.