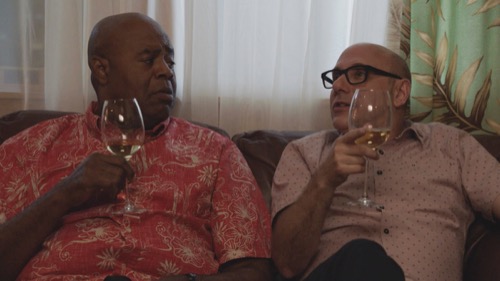 Tonight on CBS Hawaii Five-0 air with an all-new Friday, March 13, 2019, episode and we have your Hawaii Five-0 recap below.  On tonight’s Hawaii Five-0 season 10 episode 20 called, “He puhe’e miki (A gripping cuttlefish),” as per the CBS synopsis, “While Five-0 investigates a scheme to rob tourists, Tani helps Girard Hirsh prove the innocence of his elderly uncle when he’s suspected of murder. Also, Tani and Junior work on the nuances of being in a new relationship.”

Junior and Tani are together now. She asked him to stay over because she thought she was ready for it and it turns out she’s not. She wasn’t used to waking up to full table spread. She thought it was a little too much and she may or may not have said she regretted asking him to stay over. Tani was not a morning person. She usually just grabs a coffee on the way to work and even then she tends to run late. She wasn’t used to full breakfast. She wasn’t sure what to do with it and so she offended Junior. It was rocky beginning to their relationship.

Tani was later saved by a phone call. McGarrett asked her to carry out a personal favor for their old friend Hirsch. Hirsch recently moved in his elderly Uncle Oscar. Oscar was the one that taught him the trade as a conman and so Hirsch owes him. He told Oscar to move in because he wanted to help. He also got started on unpacking Oscar’s boxes and he came across something valuable. He found an antique snuff box. It could potentially be worth hundreds of thousands and so Hirsch wanted to know if the item was hot or not.

He went over to McGarrett. He told him about his problem and he asked McGarrett to check any police files for a missing snuffbox. Hirsch was hoping there wasn’t a record. He knew if there wasn’t that he could resell it and so McGarrett was getting Tani to do him a favor. Tani later ran the snuffbox. She found a police record for it and so there went Hirsch’s retirement plan. The snuffbox was stolen back in 1978. It belonged to Tabitha May and she reported it stolen after someone broke in and even killed her housekeeper.

1978 is also the year that Uncle Oscar left the island to go to Seattle. He was only moving back now for his health and so it looked like Hirsch’s uncle was connected to a murder. Tani believed it. She also had evidence backing it up. Uncle Oscar passed as a different man and he got engaged to Tabitha. He disappeared right after the theft and murder. It was clear Oscar was their guy and so Tani asked Hirsch to take her to his uncle. Hirsch was hoping his uncle had an answer for it. He introduced Oscar to Tani and the moment Tani mentioned 1978 – Oscar’s blood pressure shot up.

His nurse had to step in to tell Tani that Oscar wasn’t in a position to talk. Tani and Hirsch instead chose to talk to his mark. They found Tabitha May who was still living on the island and they asked her about her fiancé. Tabitha told them everything the police told her. She said the guy that proposed to her had also fleeced several other women on the island and despite it all, she still considers him the great love of her life. Tabitha had genuinely cared for Oscar. It wasn’t her fault that he was only after her money and so hearing that had put it prospective for Hirsch.

Hirsch has always revered his uncle. He never really saw the downside to what Oscar did until he spoke with Tabitha and so he left not knowing if his own uncle was killer. Tani was helping find the answers when the rest of her team caught a case. Five-0 was alerted after two tourists were targeted. The tourists rented a car that the gang made sure had a nail in its tire and then these gang members followed the car until it had to pull over. They pretended to be helpers when really they were robbing the tourists.

This time things went differently. Greg Dean tried to fight back when they were taking his wife’s wedding ring and so he got shot for his troubles. His wife then ran off and she was shot as well. Only Cynthia survived. She was taken to the hospital and she identified the men that killed her husband. The team went to go arrest these men and while they were at it they got talking. Junior told Lou about his fight with Tani. He still does get it where he went wrong and he felt vindicated when neither did Lou.

Both men thought breakfast sounded like a nice idea. There was no reason why Tani should have gotten worked up over it and so Lou merely said she was unconventional. The two men went back to working their case. They found a guy who knew a guy and they came across one of the thieves. Their perp had been tied to a chair and was practically beaten to death. It seems he was going through the Deans’ luggage when he found something. Whatever it was it was hidden in a lead box and there was a tracker attached to it.

It couldn’t have been Cynthia’s wedding ring. She must have lied about the real reason her husband fought back and if anything it looks she and her husband were trying to smuggle smoothing into Hawaii. Cynthia withheld that because she knew she could be in real legal trouble if it ever got out. Cynthia also fled the hospital and so the team couldn’t even ask her what was in the box. They went looking for. They were still out there searching as Tani and Hirsch made headways into their own case.

They reached out to Oscar’s best friend back then. Stanley was Oscar’s fence. He would sell the things that Oscar stole and he claimed he never sold the rare gun that was used to murder the housekeeper. Stanley told them that Oscar never parted with the gun. He even claimed that Oscar might still have it because he used it in the murder and so Stanley had them believing it was Oscar right up until the end. He accidentally mentioned the housekeeper was shot through the eye and that wasn’t in the papers.

Oscar probably did give him the antique gun to the fence. But Stanley got greedy and he tried to rob Tabitha before Oscar could do it. Something went wrong and Stanley murdered the housekeeper. Tani and Hirsch now just have to prove it. They told Stanley that there were going to search Oscar’s possessions and all the while they were convincing Stanley to plant the gun while he still had time. Tani and Hirsch waited. They then moved when Stanley moved and they arrested him as he was attempting to use the murder weapon a second time on Oscar.

The whole story got out. Oscar did fall in love with Tabitha and he wasn’t going to steal from her. He was actually going go through with marrying her until Stanley got jealous. Stanley wanted the payday. He felt he deserved it and so he robbed Tabitha on his own and he killed her housekeeper. Tani arrested him after he confessed everything to Oscar. Oscar was also willing to testify against his former friend and so Hirsch had been right about his uncle. His uncle wasn’t a bad man. He just had horrible friends.

Oscar later returned the snuffbox to Tabitha. He had never robbed anyone ever again and he was still in love with her. If things go right between them then Oscar never has to move in with Hirsch and so Hirsch was happy. He also advised Tani about what to do with her own love life. The rest of the team in the meantime had found Cynthia. She and her husband were trafficking diamonds for a group and the group wanted their diamonds while Cynthia wanted revenge. They arrested her before she could kill anyone.

They got her to turn herself in. So, the team was able to close two cases tonight and Tani later revealed what happened with breakfast with Junior. Her mother had left when she was very young. It had messed her up and so she doesn’t think she deserves love. She tries to mess it up before it could go wrong on its own and she told Junior as much. Junior was very understanding. He and Tani were able to talk it out and so it resolved on its own.

McGarrett also later got a call from his mother’s lawyer saying there was a package Doris still had for him.