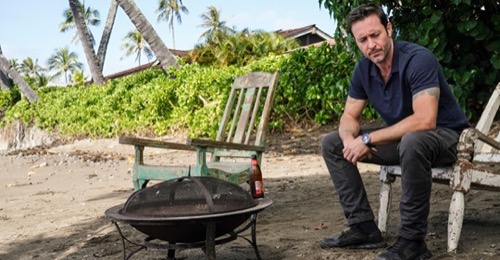 Tonight on CBS Hawaii Five-0 air with an all-new Friday, April 3, 2019, episode and we have your Hawaii Five-0 recap below.  On tonight’s Hawaii Five-0 season 10 episode 22 series finale called, “Aloha (Goodbye),” as per the CBS synopsis, “Danny is abducted and badly wounded by Wo Fat’s wife, who is after the cypher Steve’s mother left him. Also, Steve finally solves the case his father left for him 10 years ago.”

Someone broke into McGarrett’s house. He or she was looking for the cipher McGarrett’s mother had given him and they didn’t get it. They got an empty envelope. They thought the cipher was in the envelope and so it’s a good thing McGarrett never put it back. He still has it. He now knows other people want it and this proved to him that it was important. McGarrett reached out to a new friend. He got this friend to recommend a former NSA member and so McGarrett has someone to help him break this cipher.

McGarrett was going to meet with this person. He was waiting on them when Danny called him and he said he was being followed. Danny didn’t know who was following. He just knew that more people were beginning to follow him the more he looked back and so he was doing his best to escape them, but unfortunately, they fired at him and Danny’s car was run off the road. He was driven into a ditch. He was left vulnerable and Daiyu Mei used that moment against him. She kidnapped Danny.

The question now is why? Why did Wo Fat’s wife kidnap Danny knowing full well that Five-0 would come after her? Mei took a great risk by taking him. She must have done so for a reason and the team was going to find out what that was. They checked security footage for the area around Danny’s abandoned car. They found the moment Danny was dragged from his car and a hood was put on his head. They were going to trace the car that took when Mei surprised everyone by calling them.

Mei didn’t want Danny. She wanted the cipher. She offered to trade Danny for the cipher and she warned McGarrett that she was going to kill Danny if she didn’t get it. She also threw in a nasty reminder. She told McGarrett that he shouldn’t let another loved one die because of his stubbornness. Her words had touched a nerve and so McGarrett wanted to do as she said. He was willing to meet with her alone to hand over the cipher. His team had advised him against it because they didn’t trust Mei and they thought she was playing on McGarrett’s worst fears.

McGarrett’s father died because he had made a mistake. He didn’t want to let that happen again and so he pushed his team away. McGarrett went to meet. He handed over the cipher and Mei was to renegade on their deal, but Danny had escaped his chains and he had saved his own life by doing so. He killed several guards that were in his way. He took a bullet to the shoulder and he survived long enough for his friends to come to get him. They later rushed him to the hospital where he received treatment and Danny had to have surgery.

Danny’s friends were all worried about him. They even prayed for him and so it was the new friend Lincoln that told McGarrett they needed to get back to business. They had to decode that cipher. They took a photo of it and Lincoln still has his guy who could work on it. Lincoln tried to get McGarrett interested in it. He just couldn’t move the man because McGarrett was too worried about Danny to think about his next step. McGarrett stayed at the hospital and he later sat by Danny’s bedside as he recovered from surgery.

Lincoln and Quinn meanwhile worked the case together. They went to go his guy to decode the cipher and unfortunately Nang was dead. He had been murdered. He was most likely killed by Mei to stop Five-0 from decoding the message and so she was one step ahead of them. Mei had killed their source. She also almost killed Danny and it was a miracle he later woke up at the hospital. Danny and McGarrett were together when Lincoln and Quinn called. They managed to crack the code on their own.

They found out it was coordinated. The coordinates led to a cemetery on the island and McGarrett knew it because that’s where his mother’s first grave was. The one she had after she faked her death. McGarrett visits the grave with his father and so he later met with Quinn and Lincoln at the grave. They were too late to find out what was inside of it. Mei’s people had already been there and nearby security cameras showed how they removed a lot of money from what was supposed to be an empty vault.

McGarrett’s mother had left the money for him and his sister. She felt like she had a lot to make up for towards the end. Hence the money and how she was keeping in secret for them. McGarrett and his team traced the people that robbed the vault back to Mei and they went after her. McGarrett even called for the rest of the team. They all wanted to take Mei down for what she did to Danny. They swarmed in on her and they took Mei’s people. They then came to arrest Mei. McGarrett had been the one to arrest her and she had tried to manipulate him into shooting her.

She mentioned his father. She said McGarrett was just like his dad and that he was very principled. John’s last words to his captors were to ask them not to tell his son that Doris was alive. John hadn’t wanted his son to feel hurt and so he tried to protect him with his last breath. Mei had spat at the memory. She also tried to imply that Wo Fat and later his wife had deserved the money Doris left. Mei tried to say that Wo Fat was Doris’s son as well and McGarrett stopped her. She said no one who believed themselves to be Doris’s son would ever have killed John McGarrett.

McGarrett arrested Mei. He was finally ready to put the past behind him and so that made him think about his choices. McGarrett realized he came back to the island and stayed on the island for his father. He wanted to find out what his father was last investigating. It turns out his dad was looking for Doris and so McGarrett felt ready to move on. He was going to leave Five-O. He said goodbye to his friends and he left the island.

McGarrett was later joined by Catherine.

It turns out she was the one that cracked the cipher and she did it because she still cares about McGarrett.

And so they left the island together.