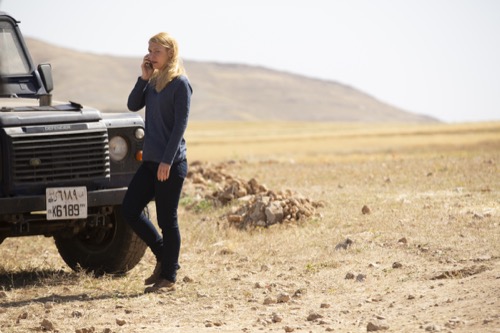 Tonight on Showtime their Emmy Award-winning drama series, Homeland airs with an all-new Sunday, March 22, 2020, season 8 episode 7 called “F**ker Shot Me,” and we have your weekly Homeland recap below.  On tonight’s Homeland Season 8 episode 7 “F**ker Shot Me,” as per the Showtime synopsis, “Saul unexpectedly comes across an unlikely ally that could change things, but the same thing happens to Carrie.”

Saul and Haqqani are both in a car on their way through the streets of Kabul to make the prisoner trade. Saul tells him that G’ulom is the government now, he will have to behave because the whole world is watching. Haqqani says G’ulom doesn’t care what the government thinks. They arrive, Haqqani says he is ready.

G’ulom gives the order to release the prisoners, who when they see Haqqani they are excited. Saul tells G’ulom to treat Haqqani with respect and give him a fair trial. Haqqani is seized and put in the back of an army truck.

Saul returns to headquarters and is approached by Jenna who tells him that Carrie escaped after walking down the jetway, she left with Yevgeny. Saul doesn’t think she went far, she is worried about Max.

Carrie is with Yevgeny they are driving through Pakistan, he is helping her to find Max. They arrive at a blockade, Yevgeny gets out and speaks to the two men and convinces them to let them pass and Yevgeny tells her that they have a line on Max. They arrive at a village, Yevgeny gets out and goes to speak to a man. Carrie covers up and decides to go for a walk, she finds a gravesite where all wedding guests were buried and remembers back to the bombing. Yevgeny walks up, Carrie is upset, she says it is not a coincidence that they ended up here. He says it is not a coincidence they are there, but he is not messing with her, and he knows where Max is, it is not far.

Back at headquarters, Saul attends a meeting with the White House to talk about Haqqani’s trial. The President walks in and continues to listen in. Saul says they should submit evidence on Haqqani’s behalf. The President says that the body of the former President arrives tomorrow and everyone is going to be asking what they did to avenge his death. He tells Saul not to disclose their classified materials, just get him the god-damn action plan he asked for two days ago.

Carrie and Yevgeny are on their way to find Max. Carrie is still talking about the wedding when everyone was bombed and Haqqani was the target. She thought she could make things right by getting Haqqani and then more people died. She asks Yevgeny if he really didn’t know that she was the one who pulled the trigger and killed all those people in the village. Yevgeny evades the questions, by saying he is trying to find her friend.

They arrive at a makeshift prison of sorts, Carrie gets out and follows Yevgeny. One of the captors says that they can visit the American, but they cannot take him. Carrie runs past and heads inside, she finds Max in a bed, handcuffed. He tells Carrie that he had the black box, but someone sold it. She tells him that he did good, she is worried about his back, Max says that he was shot. Carrie is going back to the truck, he tells her to stop they don’t have much time. All of a sudden, more men show up at the prison. Yevgeny sees them and tells his contact his isn’t right. The men take Max, Carrie is shouting that she will find him. Yevgeny asks his contact where they are taking Max, Carrie starts to go after the man, Yevgeny tells her to back off, he is taking care of this.

The president’s “empty” casket arrives in the US, his wife is there and she is surprised to see G’ulom; he wanted to pay his respect.

Saul goes to visit Tasneem’s father. Tasneem is there, Saul is surprised and hoped he could be alone with her father. Her father says anything that he wants to say, he can say to them both. He says that Haqqani is in custody, G’ulom wants the firing squad. Saul says the truth is that Haqqani did not shoot down that helicopter. Saul says he wants anything that could slow the trial and prevent Haqqani’s execution. Her father says you want us to work together like ’79, we were friends then. After 9/11 friends again, but only when you need our help. He reminds Saul that in the room they are in, they speak the truth. Saul says that the war will land on them. Saul is about to go back to the airport, Tasneem knocks on his window, he opens it and she tells him that she will help him.

Carrie is still with Yevgeny, they have tracked Max to the new hideout. Yevgeny is reluctant to do anything, he doesn’t want to start a war with the Taliban. Carrie goes to call Saul, he can put together an extraction team; he doesn’t answer. Carrie then calls Jenna, Mike grabs the phone and tells him that she found Max, he is shot and critical, held by seven teenage Taliban. Mike asks her if she knows how much trouble she is, she hands upon him.

Saul and Tasneem meet with the judge presiding over Haqqani’s trial, Saul tells her that Saqqani is innocent and he has classified evidence to prove it. The judge agrees to order a continuance to buy some time, but she doesn’t think she can give them more than a week.

Carrie is in the truck, Yevgeny goes to get her, someone is arriving at the hideout where Max is. She looks through her binoculars, it is Haqqani’s son. He goes inside and asks Max who shot the helicopters down, Max replies, what helicopters. Max is not looking good.

Carrie calls Mike and tells him that Haqqani’s son is there and she is wondering what is taking so long for an extraction team to get to Max. She reminds Mike that Max is one of theirs and they just can’t abandon him. Carrie tells Yevgeny that they are not coming, she has to get in closer to see if he is alive. Yevgeny says he is leaving then, she says she knows. Then she asks Max for his gun, he gives it to her.

Saul goes to see Haqqani and tells him that the trial will be postponed to give them time to prove that he did not shoot down the helicopter and prove his innocence. Haqqani says forty years of war, nobody is innocent.

The courtroom is packed, Haqqani is led in by guards with jeers and shots by people in the courtroom. Saul is looking for the judge it is not her that comes out, they switched judges on them. The judge says that Haqqani murdered the two presidents, brought misery and pain on everyone and he deserves a thousand deaths but this court can only give him one. The judge orders him to death.

Saul calls David to tell him what happened, in turn, David tells Saul that John Zabel is in with President Hayes.

Saul is worried, he thinks Afghanistan is going to go up in flames.

Back to Max, his captors pull him out of his prison cell to a courtyard. There they forcibly put an orange jumpsuit on Max, while one of the men is getting a camera ready. Carrie is hiding behind a fence, gun ready, Yevgeny is there and urges her to back off.