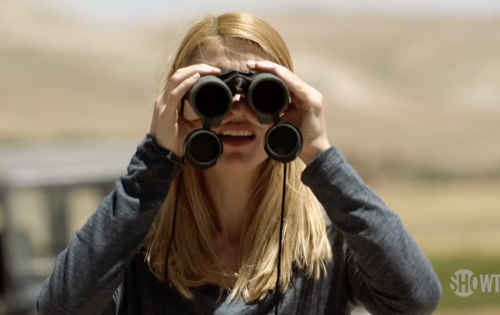 Tonight on Showtime their Emmy Award-winning drama series, Homeland airs with an all-new Sunday, April 5, 2020, season 8 episode 9 called “In Full Flight,” and we have your weekly Homeland recap below.  On tonight’s Homeland Season 8 episode 9 “Threnody,” as per the Showtime synopsis, “Hayes has ideas. Carrie goes shopping. Tasneem has problems.”

Tonight’s episode of #Homeland opens with Carrie and Yevgeny looking for the flight recorder, but are not alone, they are being watched.

Saul is back at HQ and sees Mike watching Carrie on video surveillance, he tells Saul that she is on the run. Saul corrects him and tells him that she is out looking for the flight box and wouldn’t be out there if someone had told him the plan when he went to meet with her. Mike laughs it off and tells Saul he has been called back to Washington.

Carrie and Yevgeny stop at a hotel. A TV in the lobby is playing the news that Pakistan has threatened that America getting involved in Jalal Haqqani’s potential capture was an act of war. Yevgeny asks Carrie if she believes that Jalal shot down the helicopter, she says no, it could have been a mechanical or pilot error, nobody knows right now. They go to their rooms, Yevgeny tells her to knock on the wall if she needs anything.

Tasneem goes to see Haqqani’s right-hand man and tells him that she wants to be brought to Jalal. He agrees but makes her driver stay put and has a black hood put over her head so she cannot see.

Carrie is out of the hotel with Yevgeny, a young boy tries to get their attention, he tells them he knows what they are looking for and he knows where it is, follows them. He takes them through some streets and down a long alleyway, he knocks on a door. A man welcomes them in and tells them they came to the right place, he gives the boy money. The man ushers them into a back room of a building, he says he has the only four flight recorders available. Carrie tells him that she is looking for a recent flight recorder from the last 72 hours. He doesn’t have it and he tells Carrie he hasn’t heard anything.

Saul meets with the president, Zabel is there, he is his special advisor on Pakistan. Saul tells the president that he doesn’t believe that Jalal shot down the helicopter, there are many reasons why he would want to take responsibility. The president tells Saul that Pakistan either stops making their country a safe harbor for terrorists, or else.

Carrie is in a pawn shop and she sees Max’s backpack. Yevgeny comes in and calls Carrie out to the back, she asks the guy if he has the flight recorder that was in the backpack, he says he sold it to a broker two hours ago, Carrie is willing to pay anything for it, he agrees and she tells him that she will be back at midnight.

Tasneem is with Jalal, she asks him if they really have gotten to this level that his men treat her like a barnyard animal. She tells him that America is threatening Pakistan because he said he shot down the helicopter, she is the one who picked him up when his father threw him out on the street. He tells her that she doesn’t control them, she has it backward. Jalal walks out of the room and follows him outside, he shows her that he basically has an army of men with weapons outside, he says his army is twice as strong now. He says this is why he will never run and she will never come for him; spare him her empty threats.

Yevgeny and Carrie are back in the hotel, he tells her eight men are hunting her, they need to leave. She says she just needs a few more hours. He tells her to grab her stuff, they are going. Carrie calls Jenna, she tells her she has a lead on a flight recorder and before she brings Mike into this, hear her out. Carrie tells her that she needs to know where the safe house is, once she gets the recorder she will turn herself in. But really, Carrie is going to rat the team out to Pakistan police to buy her some time. Jenna calls her back and gives her safe house information.

Tasneem goes to her father and tells him how bad the situation is. She tells him that they have to protect Jalal to protect themselves.

Jenna finds out that the Pakistan police have found the safehouse, she knows that Carrie double-crossed her.

Carrie escapes the hotel, she calls Saul and tells him that she needs money, she has a lead on the flight recorder. She needs a million at least. Carrie knocks on the door to the pawnshop, the door opens and she is ushered in, the buyer is there, he wants diamonds or gold in exchange. She says she is going to pay him by wire transfer to an account of his choice.

The flight recorder is put on the table for Carrie, she hooks it up to her computer. Carrie calls Saul, he says he sent her an email with a link and a password for the money. Carrie logs in on her computer, she calls the original buyer over and tells him that all she needs is his account number. He receives his money, she pulls a gun on him and tells him to get out. Carrie listens to the recording, Yevgeny surprises her and grabs her gun. He tells her to go ahead and play the recording, it is pretty clear that there was an engine malfunction, they tried to make an emergency landing.

Carrie tells Yevgeny that they need to bring the black box to the American embassy, they can continue to work together secretly. He tells her that she lied to him, she says she didn’t, he would have done the same thing, he did do the same thing, he ended up here. Yevgeny kisses her, picks her up and puts her on one of the tables; he then sticks a needle in her neck, she passes out and he tells his men to grab the flight recorder.

Pakistan is getting missiles ready, the US president orders to get planes in the air and ready. Meanwhile, Yevgeny puts Carrie back in her bed in the hotel, he kisses her and walks out of the room.