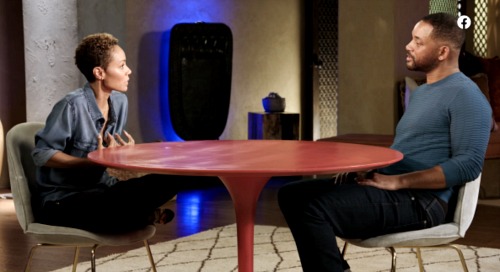 Jada Pinkett Smith has made a startling revelation on a special edition of her “Red Table Talk” show on Facebook. She and husband Will Smith appeared together on the show on Friday to share their side of the recent rumors and controversy about her relationship with rapper August Alsina. During their appearance, which was just Jada and Will sitting at a table talking, the couple cleared the air and set the record straight.

This came after Alsina said in an interview with radio host Angela Yee that he had been involved in a relationship with Jada about four years ago. Jada and Will Smith have been married since 1997.

During that interview, Alsina said that he had “sat down with Will and had a conversation” and that Will gave his blessing on their affair. That statement led to a lot of talk and speculation about Jada’s relationship with Alsina.

Well, in their “Red Table Talk” show, Will and Jada stated that they felt the need to talk about what had happened since there was so much media buzz after Alsina’s interview. “We just felt like it got to the point where you gotta say something,” Will said.

Jada stated during the program that she and Alsina began a friendship shortly over four years ago and that it turned into more than that once she and Will hit a rough patch.

Jada said that she became acquainted with Alsina through her son Jaden Smith, and that the rapper was “really sick” at the time. Jada said that “it all started with him just needing some help, me wanting to help his health, his mental state.”

After explaining her relationship with Alsina, Jada said that she wanted to address the statement made by Alsina that Will had given his permission for the affair. Jada denied that claim, saying that the only person who could give permission in that circumstance was herself. But she did add that “I could actually see how he would perceive it as permission because we were separated amicably and I think he also wanted to make it clear that he’s also not a home wrecker, which he’s not.”

Jada went on to explain that she was in a lot of pain and felt broken during the relationship with Alsina. Jada said that she and Will “tried everything we could to get away from each other, only to realize that wasn’t possible.”

Will and Jada eventually reconciled after she ended her relationship with Alsina, and Jada says that she hasn’t spoken to Alsina in several years.

Will and Jada’s conversation seemed cordial and they made it clear that this was a storm that they had weathered together. Will stated during the show that for him, this was all “years ago,” and Jada also acknowledged that they have come far in their relationship.

But Will did push his wife to refer to her “entanglement” with Alsina as a “relationship,” so it seemed that they were definitely in a “no BS” zone during the show.

At any rate, it seems clear that Will and Jada are together for the long haul, and that they’re willing to work through their problems as they arise. In fact, at one point during the “Red Table Talk,” Will and Jada said together: “We ride together. We die together. Bad marriage for life.”

As Will’s fans know, that’s a catchphrase from Will’ movie “Bad Boys.” And it seems that the couple means it! Keep checking back with CDL for all the latest showbiz news – we’ve got you covered!