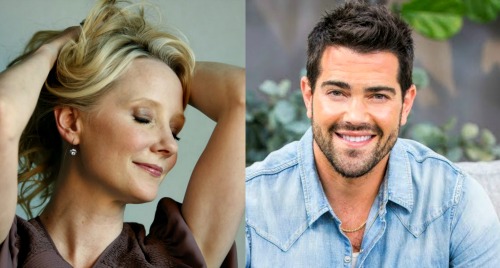 We’ve got some exciting news to pass on about the upcoming season of ABC’s Dancing With The Stars and 2 former soap stars. As you probably know by now, Season 29 of DWTS is going to look a bit different than the ABC show has been in the past, as the show is undergoing a “creative refresh.”

Tyra Banks will be hosting and executive producing, and she’s promised that it will be “next level” while still honoring the show’s history.

Well, now we can report that two of the stars who will be appearing as dancing contestants on the show will be former soap actors – Jesse Metcalfe and Anne Heche. Jesse Metcalfe portrayed Miguel Lopez-Fitzgerald on Passions from 1999-2004, and he subsequently portrayed John Rowland on Desperate Housewives from 2004-2009.

Jesse is also well-known for playing John Tucker in the 2006 film John Tucker Must Die. More recently, Jesse has appeared in the series Chesapeake Shores and in several TV movies and major motion pictures, including the 2020 film Hard Kill, which is currently available on demand.

As for the other soap star addition to DWTS, viewers of Another World will remember Anne Heche as the portrayer of twins Vicky Hudson and Marley Love. Anne held those roles from 1987-1992, and from there she went on to appear in films such as Donnie Brasco, Psycho, and Six Days Seven Nights. During the past several years, Anne has appeared on the series Chicago PD, Quantico, and The Brave.

The news about Jesse Metcalfe and Anne Heche appearing as contestant on DWTS was first reported by Us Weekly. The outlet also reported that former NFL player Vernon Davis (he played for the Denver Broncos and the San Francisco 49ers) is also on board as a ballroom contestant on the upcoming season of DWTS.

Other contestants for the 29th season of DWTS include Backstreet Boys member AJ McLean and former Bachelorette Kaitlyn Bristowe. It’s looking like it will be an exiting season on the ballroom dance competition show, despite the departure of former hosts Tom Bergeron and Erin Andrews from the action.

We’ll keep you posted on all the latest Dancing With The Stars developments – you never know who will join the contestant lineup next! Are you looking forward to the new season of DWTS? Stick with CDL for all your entrainment news – we’ve got you covered!