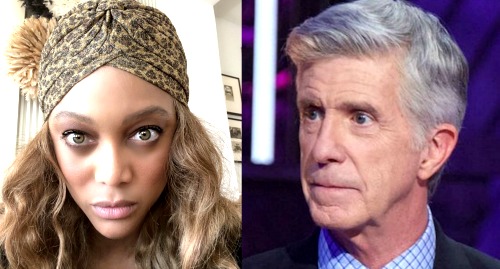 We’ve got some news to pass on about the changing of the guard on Dancing With The Stars. As you may know, Tom Bergeron broke the news yesterday that he had been let go and will no longer be hosting DWTS when the show returns. Both Tom and his co-host Eric Andrews have departed DWTS, as the show will undergo a “creative refresh.”

A press release stated that Trya would be working closely with DWTS executive producer and show runner Andrew Llinares to “spark a creative refresh” that’s currently planned for the 29th season of the show “while honoring the show.”

That certainly sounds like some big changes may be coming to the DWTS format – it should be interesting to see exactly how the show will return in the fall.

“I like breaking those doors down so that we don’t have any more firsts, but it’s nice to be first, right?” Tyra said. “So that you can open that door and let so many other people in after you. So, I’m excited, yeah.” Tyra also stated that the 29th season of DWTS would be “so next level.”

Tyra said that while the producers will still be “keeping the stuff that we know America loves” but she also indicated that things would be changing. “You need to get ready because it’s going to be different,” Tyra said.

Tyra also paid tribute to Tom Bergeron and his legacy on the show. Tom has been with DWTS for all of its 28 seasons, even winning an Emmy for his hosting. “Tom had set a powerful stage, and I’m excited to continue the legacy,” Tyra said.

It will be interesting to see just how Dancing With The Stars changes with the addition of Tyra as host and executive producer. Are you looking forward to the new season of DWTS? Stick with CDL for all your entrainment news – we’ve got you covered!