Allison Holker Returns To Dancing With the Stars Season 23 After Having Baby! 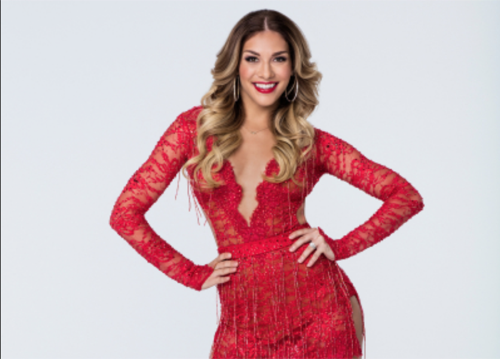 New mom Allison Holker is heading back to the ballroom for the 23rd Season of Dancing with the Stars. She had taken a hiatus from DWTS’ 22nd season to have a baby. Allison Holker, 28, and her husband Stephen “Twitch” Boss welcomed their first child, son Maddox Laurel on March 27, 2016. The dancers originally met as All-Stars on So You Think You Can Dance, Season Seven in 2010, and tied the knot in December 2013.

Allison has already been on 3 seasons of ABC’s Dancing With the Stars. In Season 19, she was paired with Jonathan Bennet, actor from the show Mean Girls. They finished in ninth place. In Season 20, her dance partner was Riker Lynch from American pop rock band, R5. They placed second place that year. Allison and Andy Grammer, an American singer, songwriter, and record producer took seventh place in Season 21.

Allison revealed how she managed to regain her incredible abs after being pregnant. “I love working out. Since day two of being home from the hospital, we went hiking. I started working with my yoga instructor every Tuesday at 9 a.m. in my backyard, and it’s wonderful. I meditate, and then I work out.”

As reported before. Allison won’t be the only familiar face returning for Season 23. Dance pro Gleb Savchenko will be back as well after DWTS gave him an offer he couldn’t refuse. He had quit the show Strictly Come Dancing in June of this year, citing that he needed to spend more time in his native Russia.

When he was approached by DWTS, he told the show that his family is his number one priority, so only after Dancing With the Stars’ producers promised to take care of his wife Elena and their 5-year-old daughter Olivia, he agreed to sign with the show. Fans will remember him when he was paired with Reality star, Lisa Vanderpump in Season 16.

The full list of Season 23’s participants will be announced on Good Morning America on Tuesday, August 30th. Dancing With the Stars 23rd season premieres Monday, September 12 at 8 p.m. ET.