Who Will Be Voted Off Dancing With The Stars Season 23 Week 2? – Vote in DWTS POLL! 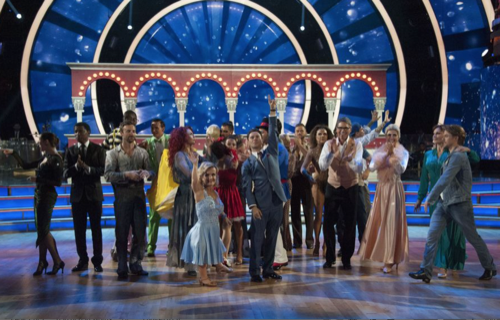 ABC’s Dancing with the Stars for Monday, September 19th Season 23 Week 2 had the dancing duos performing to their favorite TV Theme Songs.

Maureen McCormick and Artem Chigvintsev danced the Quickstep to The Brady Bunch theme and scored a 26/40. [Video here]

Jana Rae Kramer danced the Tango with Gleb Savchenko to the song “I Don’t Want to Be” played by Gavin DeGraw, from One Tree Hill. She went forward and danced after she had injured her muscles between her ribs and you could see the pain she was in, but you have to give her props for not giving up. They were scored 29/40. [Video here]

Rick Perry and Emma Slater did the Quickstep to the Green Acres theme. Their performance was no better than last week’s, the Judges seem to be contradicting each other but this duo still is at the bottom. They were scored 22/40. [Video here]

Calvin Johnson Jr. and Lindsay Arnold did the Foxtrot to the theme of Family Matters. You have to admit it was pretty funny when Tom Bergeron called the former wide-receiver “Urkel on steroids!” They were scored 28/40. [Video here]

Amber Rose and Maks Chmerkovskiy danced the Viennese Waltz to the Game of Thrones theme, although her dancing and confidence improved, the dance was not that great. They were scored 24/40. [Video here]

Jake T. Austin and Jenna Johnson danced the Cha Cha to the Go, Diego, Go! theme. Jake has this attitude; he seems a bit cocky. He was upset about his score last Monday, and this week isn’t much better. They scored 24/40. [Video here]

Vanilla Ice (Robert VanWinkle) dances the Foxtrot, with dance partner Witney Carson to “Love and Marriage” the theme to Married… with Children. The one annoying thing was Vanilla Ice was lip syncing as they danced and Judge Carrie Ann called him out on. They scored 26/40. [Video here]

Terra Jole chose to do the Quickstep to Bewitched, with partner Sasha Farber. Judges had nothing but praise for these two. Terra may be a little woman, but she has got the moves and her and Sasha are rocking it. All the judges agree and they have one of the top scores of the night. They scored 31/40. [Video here]

Kenny “Babyface” Edmonds and Allison Holker did the Argentine Tango to The X-Files. How do you do a sexy dance to the theme of an outer-space show? Easy!! You add a few notes and change the music! Judge Bruno nailed it when he said that Scully and Mulder had that intense chemistry on the show, so it worked. They scored 30/40.

James Hinchcliffe and Sharna Burgess choose to dance the Paso Doble inspired by The Walking Dead, even though they didn’t have a lot of rehearsal time, the judges rated them pretty high. They scored 29/40. [Video here]

Marilu Henner and Derek Hough chose to perform the Foxtrot to Taxi’s theme song. Judges loved them even though Derek struggled with trying to make the theme “danceable”. They scored 29/40. [Video here]

Ryan Lochte and Cheryl Burke danced the Quickstep to The Muppet Show. Judges had the same complaints as last week. Ryan has very bad posturing and needs to work on that if he makes it through to next week. They scored 24/40.  [Video here]

Remember that you need to vote in order to keep your favorites in the competition. After watching tonight, Monday, September 19th’s Dancing with the Stars, who do you think will be eliminated tomorrow? According to the judges, Rick Perry and Emma Slater are in the bottom, and you can bet that everyone will agree with that. Who do you think will be eliminated? Rick Perry who had the lowest score, or one of the three tied with 24/40: Amber Rose, Ryan Lochte or Jake T. Austin?