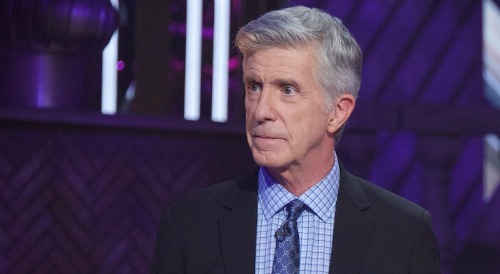 Tom broke the news on Twitter last night, in a tweet that read: “Just informed @DancingABC will be continuing without me. It’s been an incredible 15 year run and the most unexpected gift of my career. I’m grateful for that and for the lifelong friendships made. That said, now what am I supposed to do with all of these glitter masks?”

Fans have been replying right and left to Tom’s tweet, with most completely devastated that he’ll no longer be a part of the institution of DWTS. One person summed it up by saying: “DWTS will never find someone who can handle all of the challenges of live tv as well as you did. You are a class act in how you are handling the announcement, which is a rarity in your field. Wishing you only the best in whatever you choose to do next.”

And someone else said: “Oh nooooo!!!!! You’re an institution. It’s not @DancingABC without you!!!!” Finally, someone quipped: “Is this you finally becoming a contestant?” To that, Tom replied: “Um..no.”

ABC also put out a statement of its own, saying “Tom Bergeron will forever be part of the Dancing With The Stars family. As we embark on a new creative direction, he departs the show with our sincerest thanks and gratitude for his trademark wit and charm that helped make the show a success.”

The statement also indicated that co-host Erin Andrews wouldn’t be returning either. “We appreciate all that she brought to the ballroom,” the statement said.

It will definitely be the end of an era on DWTS, and we should note that Tom even won an Emmy for his work on the show. One wonders exactly what DWTS will look like when the show does return.

As you might be aware, the show recently changed from airing two seasons per year to airing just one season per year. The most recent season ended in November 2019, with Hannah Brown of The Bachelorette winning the contest.

In addition to hosting DWTS for 28 seasons, Tom has also hosted game shows, including The $100,000 Pyramid and Hollywood Squares. Tom also hosted America’s Funniest Home Videos from 2001-2015 as well.

Will you miss Tom Bergeron on Dancing with The Stars? Be sure to stick with CDL for all your up-to-the-moment entertainment and celebrity news. We’ve got you covered!