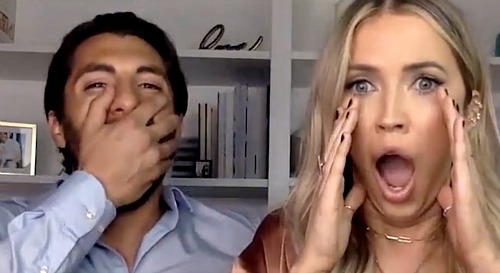 The Bachelorette fans certainly remember Kaitlyn Bristowe from her run on season 11, but she was recently offered the chance to be on another popular ABC reality show: Dancing With the Stars. As DWTS gears up for season 29, Kaitlyn has accepted the chance to be a contestant. Here’s how Kaitlyn’s dream came true.

Kaitlyn and her boyfriend, Jason Tartick, were interviewed by Chris Harrison on The Bachelor: The Greatest Seasons – Ever! It was a special episode designed to look back at all the exciting moments and memories, but the real bombshell came when Kaitlyn got this DWTS offer.

As someone who’d pushed for a spot on Dancing With the Stars before, Kaitlyn was taken aback to learn it was finally happening. After mistaking Jason’s Air Pods case for an engagement ring box, there were some laughs all around. However, it was Chris who ultimately popped a very different question!

“In all seriousness, I do have a very real question for you, Kaitlyn,” Chris insisted. “And this is a question I am so excited to ask you because, well, your life is about to change and I’m not joking. Kaitlyn, will you be on the next season of Dancing With the Stars?”

Naturally, Kaitlyn was over the moon – and her thrilled reaction showed it! Kaitlyn got confirmation that Chris was indeed serious and admitted she was shaking. She could barely contain her excitement and instantly thought back to when she first found out she was The Bachelorette.

“That is the last thing I thought in the world you were going to say,” Kaitlyn said. She added that she thought Chris was going to ask her to take over his job! Kaitlyn was still freaking out over the big news, so she hadn’t even given her answer at that point. That prompted Chris to point out that he still needed a “yes” or “no.”

Kaitlyn eventually gave Chris an enthusiastic “YES!” It sounds like Kaitlyn’s all set for Dancing With the Stars season 29 – and she’ll undoubtedly be a great addition. As other updates come in on future DWTS contestants, we’ll pass along all the details.

What do you think about Kaitlyn Bristowe joining DWTS? Will you root for her in season 29? CDL’s your hotspot for the latest celebrity news, updates, scoops, secrets and more!