Who Will Be Voted Off Dancing With The Stars 2016 Week 7, Double Elimination – ‘Icons Night’ – Vote in the POLL

BY Amanda Austin on May 3, 2016 | Comments: one comment
Related : Dancing With the stars, Hot News, Reality TV, Spoiler, Television, TV 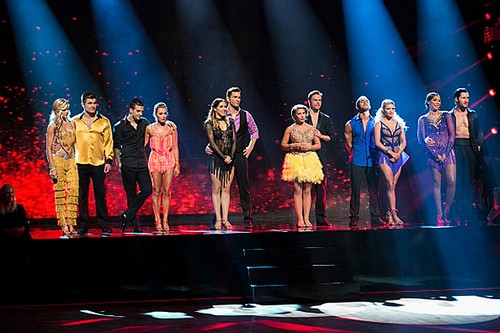 We combined last week’s DWTS scores and our own personal opinions on the remaining couples for your Week 7 predictions. Don’t forget to vote in the poll below and let us know who you think will be voted off Dancing With The Stars Season 22 next!

Although we use the term “Definitely” loosely during a double elimination week, Boyz II Men crooner Wanya Morris scored the highest judges’ score in Week 6, and he and his partner Lindsay Arnold have been steadily improving week by week. If anyone is “Definitely” safe in Week 7, it’s Wanya Morris.

According to DWTS 2016 spoilers, Morris and Arnold will be performing the Foxtrot to “I Say a Little Prayer” by Aretha Franklin for “Icons Night.”

Antonio Brown wasn’t happy when he heard his pro partner Sharna Burgess predicting that Wanya was going to win the Season 22 Mirror Ball Trophy, and he decided to prove her wrong last week. Although Antonio Brown is far from the best dancer on Season 22, he definitely showed some huge improvement and the judges were thrilled.

Plus, now that Doug Flutie is gone, he will probably get some of those NFL fans’ votes that were backing Flutie. He will probably skate through the double eliminations. DWTS spoilers tease that Antonio Brown and his partner Sharna Burgess will be dancing the Tango to “Paint It Black” by The Rolling Stones.

We’re going to just assume that Paige VanZant and Mark Ballas being in danger of elimination last week was just a fluke. The UFC fighter is by far one of the most talented dancers on Season 22, and being number two on the leaderboard will make it nearly impossible for her to be eliminated, unless literally no one votes for her.

DWTS spoilers tease that for “Icons Night,” Paige and Mark will be dancing the Jive to “Proud Mary” by Tina Turner.

‘Fuller House’ star Jodie Sweetin may not be the best dancer on Season 22 of Dancing With The Stars. But, she certainly knows how to wok the under dog votes. Jodie bought herself a few weeks with her moving interview about overcoming her substance abuse issues. And, last week she impressed a lot of DWTS fans again with her “don’t give up attitude” when she took the stage and danced after snapping her ankle in rehearsal, the video went viral.

With a decent score plus a ton of sympathy votes, Jodie should be safe another week. According to Dancing With The Stars 2016 spoilers, Jodie and Keo Motsepe will be dancing the Quickstep – “For Once in My Life” by Stevie Wonder.

Ginger Zee is not a bad dancer at all, but her performances definitely lack any attitude or edge – and the judges were quick to let her know that after her “Nasty” performance last week. She is technically in a three way tie at the bottom of the leaderboard. But, the fact that she is paired up with one of the most popular pros on the show and her GMA co-hosts are campaigning for votes for her could help her escape double elimination night.

But, her days are definitely numbered. According to Week 7 DWTS spoilers, Ginger Zee and Val Chmerkovskiy will be dancing the Viennese Waltz to “I Have Nothing” by Whitney Houston.

Putting Nyle DiMarco in the “Not Safe” category is a pretty bold move. But, the former ANTM winner may have dug his own grave last week when his true colors shined a bit. Nyle rubbed a lot of people the wrong way with his cocky statements about his only competition on the show being pro Val Chmerkovskiy, and even judge Len Goodman scolded him.

He could have cost himself a lot of votes, plus his score was rather mediocre compared to previous weeks. Week 7 spoilers indicate that Nyle and Peta will be performing the Foxtrot – “Beautiful Day” by U2 for “Icons Night.”

Now that all of the less than stellar dancers have been eliminated, Doug Flutie being the last of them, it’s time for the mediocre Season 22 dancers to start being picked off. Kim Fields isn’t a bad dancer, she has actually improved a lot – but she really doesn’t compare to the Paige VanZants and Wanya Millers of this season, and it will be impressive if she makes it through the double elimination unscathed.

DWTS spoilers tease Kim Fields and Sasha Farber will be dancing the Samba to “ABC” by Jackson 5 for “Icons Night.”

Last week Von Miller and Witney Carson were in danger of elimination, which means he isn’t getting a ton of fan votes, that combined with the lowest score on the leaderboard doesn’t make double eliminations look promising for the NFL pro. Like Kim Fields, Von isn’t totally bad, but he definitely can’t hang with the front of the pack.

DWTS spoilers tease that for Week 7 Von and Witney will be dancing the Salsa to “A Little Less Conversation” by Elvis Presley.

So DWTS fans, who do you think will be voted off Week 7? Kim Fields and Von Miller, or could the double elimination lead to a shocking exit like Nyle DiMarco? Let us know what you think in the comments below and vote in our DWTS poll. Don’t forget to check CDL daily for all of your Dancing With The Stars 2016 spoilers and recaps.