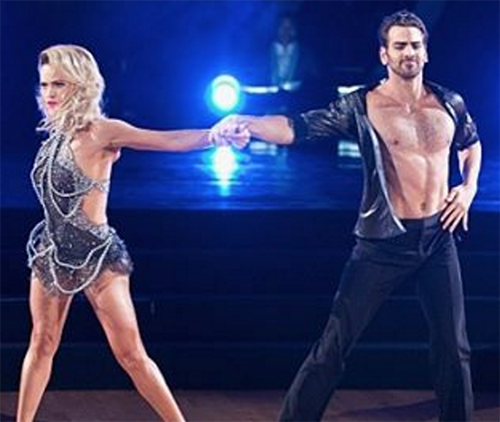 Did Nyle DiMarco just hint that he is stirring up relationship problems for his partner Peta Murgatroyd and her fiancé Maks Chmerkosvkiy? Dancing With The Stars fans are in love with Season 22’s frontrunner Nyle DiMarco – but it turns out they are alone, because Nyle’s DWTS co-stars are not fans of the former America’s Next Top Model star. Even the DWTS judges seem to be a little irked with the Deaf dancer these days, and things got awkward during Monday’s episode of the ABC competition.

Nyle DiMarco was asked the question that most contestants dance around and answer like a politician so as not to upset anyone, “Who do you think is your biggest competition?” Nyle DiMarco proudly answered, “Val Chmerkovskiy.” Even Dancing With The Stars judge Len Goodman told Nyle DiMarco to slow his role – it was a bit ambiguous of him to compare himself to a pro dancer like Val Chmerkovskiy. After the episode aired, Nyle took to Twitter to clear up the confusion, and try to downplay his cockiness.

But, did we totally miss where Nyle DiMarco was going with that statement? Was it more or less just a jab at his partner Peta’s fiancé Maks Chmerkovskiy, Val’s brother? Reports have already hit the internet that Maks is jealous of the bond Peta Murgatroyd has with Nyle DiMarco. It’s no secret Nyle doesn’t get along with the other contestants on the show – and Peta has been putting her neck out on the line for him, causing some friction not only with her future brother-in-law Val but with her fiancé Maks.

What do you guys think of Nyle’s bizarre statements about the competition? Was he just trying to ruffle Maks and Val’s feathers? Or is he really that cocky? Let us know what you think in the comments below and don’t forget to check CDL for all of your Dancing With The Stars 2016 spoilers and news!