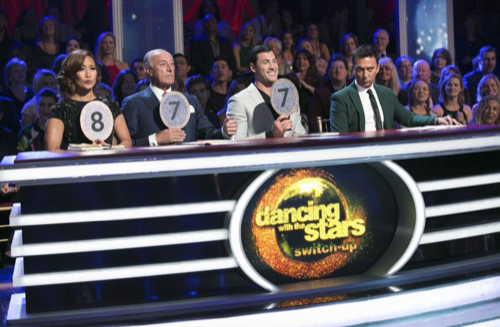 Tonight on ABC Dancing With The Stars 2016 airs with an all new Monday April 25, season 22 episode 6 and we have your weekly recap below. On tonight’s episode, an elimination occurs after the sixth week of performances, which feature re-creations of famous dance routines from movies, music videos and live performances.

On the last episode, “America Switch Up“ had really changed up the competition as fan engagement through social media had helped to “switch up” the nine remaining couples, as the celebrities and professional dancers swapped partners, on “Dancing with the Stars.” Did you watch the last episode? If you missed it, we have a full and detailed recap right here for you.

On tonight’s episode as per the ABC synopsis, “the remaining nine celebrities return to their original professional dance partners to tackle “Famous Dances Night” on “Dancing with the Star.” The couples will re-create iconic dance routines from popular movies, music videos and live performances, including “Hairspray,” “Footloose,” a famous Michael Jackson music video and a Video Music Awards routine. Each celebrity will perform a jive, Bollywood, jazz, contemporary or quickstep.”

Judges Comments: Len: “You kept the fun of Hairspray and some great jive elements, well done.” Bruno: “This is what the show is all about, get everyone dancing. You missed a little pass at the end though.” Carrie Ann: “You are the one to watch, you were fantastic. But if you are not exciting and dynamic, you disappear into the background. Your routine was incredible, but your energy was a hair under of what I thought it should have been for this routine.”

Judges Comments: Bruno: “That was bad ass. I recognized all the moves, I have to say that Michael Jackson, the key is hitting those moves and you were sharp except for a few times; but overall, you did good.” Carrie Ann: “I sensed that you were nervous, but you were killing it and your movements got sharper. You brought your own style and flavor, dangerous.” Len: “It was bad, good bad. You didn’t need that wind machine, you have a fan here.”

Judges Comments: Carrie Ann: “That was a really difficult routine to watch because there is so much aggression and so much anger in it. I think you transformed something ugly into something artistic and beautiful. You seem stronger together than ever before. I loved the danger factor.” Len: “I thought you performed it so well, just a little struggle getting into the left, it was iconic.” Bruno: “Incredibly demanding, even a professional dancer would find it tough to do that number. You did great, you almost gave me a heart attack.”

Judges Comments: Len: “I have to be honest, there was nothing about that dance that I didn’t like.” Bruno: “Smoking baby!. It really brought us back to the 60’s, what I loved was the accuracy of the stylistic details. Loved it.” Carrie Ann: “This was by far one of my favorite dances. I loved detail, high energy and fun; you both were on it.”

Judges Comments: Bruno: “I loved everything, the energy, the slapstick and you managed to maintain a true Quickstep throughout. You lost it a couple of times, but with the speed, it is almost impossible to keep up. Overall, it was incredible.” Carrie Ann: “I have a lot of respect for you because it is really hard to dance in a mask. I think you are a good dancer and a contender, but tonight, your frame was broken and you were not as crisp; I felt it got away with you.” Len: “Your performance was terrific and you never cease to amaze me. You are a good dancer, but don’t say you are as good as Val, because that is ridiculous.”

Judges Comments: Carrie Ann: “That was so much fun, you are so well rehearsed, you hit every move. This is all about attitude and I wanted to see more.” Len: “It was clean and precise but it lacked attitude.” Bruno: “There was nothing nasty about it, you did Janet with good taste. It lacked confidence, you need to go to the next level of performance.”

Judges Comments: Len: “That was a tough dance, it was jolly good, well done.” Bruno: “It was a catchy number, everything was there.” Carrie Ann: “That was by far my favorite performance of yours, it was no longer like paint by numbers. It was really fun. I loved that you had a great time truly and that is what this is all about.”

Judges Comments: Bruno: “It was pop in it’s most pure and brilliant form. You are right there, nothing is missing.” Carrie Ann: “This boy is on fire. You brought the stuff, the dirty and sexy. I have never seen you be like in it.” Len: “You have just taken a big great step into the finals.”

Judges Comments: Carrie Ann: “That is the way to bring the house down at the end of the show, you made a mistake at the beginning, but you killed it.” Len: “There is four weeks ago and it is anyone’s win. You came out with a great dance.” Bruno: “You came out and proved that you were a leading man, you’ve got it all, hard work pays off.”

Time for some results. The first team in jeopardy is Paige VanZant & Mark Ballas with Doug Flutie & Karina Smirnoff joining them along with Von Miller & Witney Carson. The remaining couples are safe. One of these three couples has the lowest scores and will be going home.

The couple eliminated from the competition is Doug Flutie & Karina Smirnoff