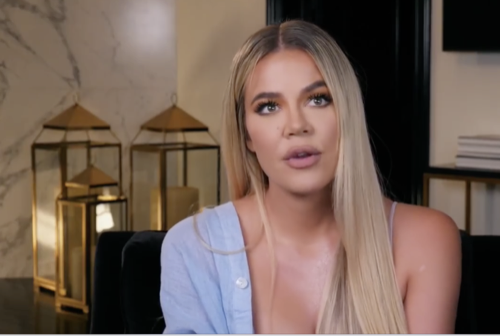 Tonight E!’s most-watched series Keeping Up With The Kardashians (KUWTK) returns with an all-new Thursday, November 12, 2020, season 19 episode 8 and we have your KUWTK recap below. On tonight’s KUWTK season 19 episode 8 called, “Love Lockdown,” as per the E! synopsis, “Khloe feels pressured to make a decision about her romantic future with Tristan.

Scott heads to a treatment center to work on his health, but is betrayed when the facility leaks photos of him. The family finds creative ways to celebrate each other’s birthdays in quarantine.”

Khloe and Tristan have been social distancing together. They have decided to do a workout with Kourtney, they all social distanced to keep it safe. Kim is getting ready to see Scott, it has been a long time, they plan on staying six feet from each other.

Scott says that Kim is a freak when it comes to being careful, so he doesn’t feel in jeopardy. If anything, Scott feels stir crazy and he is struggling with his own issues. Kim tells him that the California government has said that there are another two months mandatory quarantine order.

It’s True’s birthday party, Khloe has planned some special surprises for her even though they couldn’t do a party.

The family does a Zoom chat, Scott says he rented a house in Malibu on the beach to try to change the scenery. It’s good for the kids because they can do more activities than they do at home. Everyone starts talking about Khloe and Tristan, Scott asks her if she slept with him.

Later, at Khloe’s house she is cleaning up the garage, she is thinking about Kourtney’s birthday coming up, wants to do something special for her; she tells Kim her plans. Kim offers to order cake but Khloe says no, Kourtney won’t eat it. At home, Scott is playing with the kids, he loves the house in Malibu. At home there is no privacy from the privacy, hearing the ocean at night, and being right in front of the ocean is great.

Khloe calls Malika, this is her new normal, face timing and zooming with everyone. Khloe tells him that Tristan has been very helpful, his energy has been different. Malika tells her that Tristan is still in love with her. She says she just feels pressure, her family keeps asking her as well. She never had an ultimatum from Tristan but she can feel that he is feeling agitated.

Malika thinks that Khloe is not open to love because of all the crap that happened. Khloe feels like she has every season to have these layers up and if someone cared enough, they will take them down one by one. Khloe tells her that she doesn’t know if romantically she can get there. Malika tells her to take baby steps, see if she can get there.

It is Khloe’s birthday, the family is going to drive by Kourtney’s house with balloons and blasting music. Khloe comes outside and can’t believe what the family did for her. They decorated their cars and everyone is singing happy birthday to her. Kourtney found it way more special than a regular birthday.

Malika calls Tristan, she talks about Khloe. He realizes that he put a lot of weight on things that didn’t matter when he was with Khloe. She tells him that everything is not lost, especially because they have a family and if he thinks this is truly worth it, then he needs to fight for it. He says losing her made him lose a part of himself.

It turns out that Scott doesn’t have privacy, paparazzi are in the front and the back of the house. Scott calls Kourtney, he tells her that he can’t stand staying at home and not working. Even his escape has become no sanctuary at all. He can’t handle having nothing to do, he goes to therapy every week but he has had no breakthroughs. He just wants to be the best that he can be for his family. If she is good with having the kids, he is going to check himself in because he is really struggling. Scott is anxious and nervous, he has been in a treatment center before and knows what to expect. He wants to get to the root of every problem that frustrates him and learn to deal with them.

Kris is outside, enjoying the day and Tristan drops by. He says he wonders if he can ever get back in a good place with Khloe. Kris tells him that he hurt Khloe, he hurt all of them. The bottom line is, Kris tells him that she just wants everyone to be happy. He tells her that he is trying to crawl his way back up. Tristan and she has always had a really close relationship, so not judging what happened is very difficult for her. She says if they haven’t killed each other yet then that proves that they are compatible.

Family Zoom again, Scott tells them that he was in the center for five days and Kourtney sent him the articles about him being there, and that couldn’t be a bigger betrayal. He was there for trauma and they gave him more trauma. So, he didn’t feel comfortable there and he left because his name was getting slandered over by every news outlet. He has three children and didn’t need them to see that.

It’s Scott’s birthday, the family holds a birthday for him at his house.