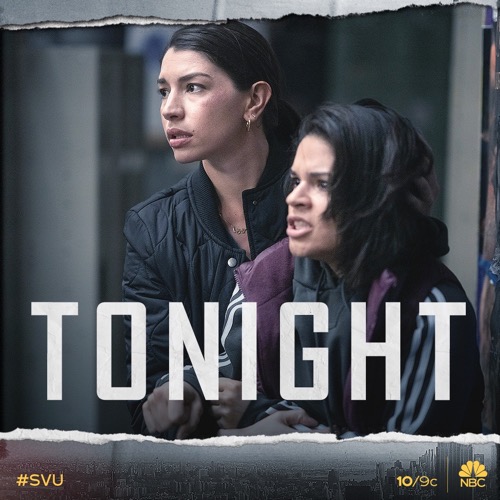 Tonight on NBC Law & Order SVU returns with an all-new Thursday, February 06, 2020 episode and we have your Law & Order SVU recap below.  On tonight’s Law & Order SVU season 21 episode 13 as per the NBC synopsis, “When an actress accuses a high-powered media mogul of attempted rape, Benson finds herself in a high-stakes game of cat and mouse.

Detective Tamin was a boxer in her spare time. She boxes at Romeo’s Boxing Club and she knew the owner. His name is Romeo Solis. He’s usually in her corner during her fights because he was also the head trainer and she’s never questioned his place there. Only, things were different with this latest fight. Tamin went up against Esperanza Morales. It was Esperanza that was going to have Romeo in her corner this time. She was also younger and faster than Tamin. Tamin did at least get some advice from Romeo before the big fight.

He told her to go for the overhand. Tamin later did just that and she lost the fight. She also noticed something while she was knocked out on the floor. She spotted Romeo getting friendly with a teenager by the name of Cami and it wasn’t the first time. Tamin had also disturbed them when she knocked on his door earlier. The door had been locked and Cami rushed out fixing her clothes. Romeo was also fixing his own clothes. It seemed suspicious and at first, Tamin wasn’t sure what she saw. She went to her boss because she wondered if she was just seeing things.

Tamin was still new at SVU. She could be seeing perps everywhere because of the job and so she had needed Benson’s feedback. Benson told her that yes she did perps everywhere when she first took the job. She also realized that her gut was telling her something important and so she advised Tamin to follow her instincts. Together they went over to Cami’s home. They asked her if Romeo was ever inappropriate with her and she denied it. She claimed Romeo has been helping her with her shoulder injury. She said that’s all that happened in his office.

Cami also needed to go to Book Club. She left the detectives with her grandmother and Mrs. Vega was asked her about granddaughter’s injury. The elderly woman said her granddaughter wasn’t injured. She said Cami does a hundred push-ups every day. The detectives spotted the discrepancy in Cami’s story and so they suggested to the grandmother that she talk to Cami about Romeo. The cops also talked to someone from the gym. They spoke with Esperanza who has been at the gym for a long time and they asked her if she has ever seen anything inappropriate.

Esperanza also said that Romeo has coached her on how to take down Tamin in the ring. Tamin realized that Romeo had set her up and she thinks it was his way of telling her to be quiet about what she saw. Tamin had wanted to Romeo right then and there, but her captain told her no. Benson, they needed more evidence and thankfully they later arrived with Cami and her grandmother. Mrs. Vega had gotten through to Cami. Cami was willing to go on record and say she and Romeo were in love.

Cami is sixteen. She said the relationship began two years ago and so SVU had cause to arrest Romeo. They went to his jail to arrest him. They walked in on his fight with Esperanza and Esperanza knocked him out. Romeo had even hit his head on the way down. SVU had needed to call an ambulance for him and they brought in Esperanza for questioning. They later asked her why she attacked Romeo. She said she did some digging and that she found out about him raping Cami. She said she confronted him about it and that things got out of control.

Tamin was asked to step away from this case because she was a little involved. She tried to get Esperanza an attorney even though she didn’t ask for one and so Benson asked her to be objective. Tamin couldn’t offer any more advice. She had to act as a detective and that’s what she did. She stayed away as Romeo was arraigned on the hospital bed. No sooner was he confined that his condition took a turn and he eventually died from his injuries. Romeo’s sudden death meant bad things for Esperanza. She was suddenly arrested for manslaughter and the cops had wanted to help her.

They advised Esperanza to get a lawyer. They also tried asking her if Romeo had ever abused her because that might get her off the hook for manslaughter and Esperanza said he never touched her. He was like a father to her. She kept repeating that last part and Tamin found it strange because she has met Esperanza’s actual father. Santos Morales kept showing up wanting to see his daughter and she never wanted to see him. Tamin also heard from the witnesses of the Romeo vs Esperanza fight that Romeo had called Esperanza damaged goods and so Tamin figured it out.

Tamin visited Esperanza without her lawyer present. It was technically against the law and Tamin did it anyway because she wanted the truth from Esperanza. She asked Esperanza if it was her father that abused her. Esperanza didn’t want to say anything first and she only caved when she found out people had overheard her fight with Romeo. She let it be known that her father abused her. She also said this without her lawyer present and so Tamin had to come back with both Benson and Esperanza’s lawyer.

This time they got on record what happened. Esperanza said her father started abusing her after her mother walked out and she said that she joined the gym to protect herself. She even told Romeo that she needed to protect herself. He took one look at her and her father and he knew why she needed protection. Romeo also never brought it up again until he accused Esperanza of being jealous of him and Cami. And he said that she was just mad that he never wanted her Papi’s sloppy seconds.

It was him saying that caused Esperanza to snap. She now has a legitimate defense for that fight and so the detectives need to prove the abuse. They tried Esperanza’s sister. She was a junkie and she wanted to be paid for whatever she said. But the detectives figured out another way. They had Esperanza agree to meet her father at the prison and this time they got a recording of Santos confessing to raping his daughter. And that with Tamin paying the sister off, helped the detectives to arrest Santos.

Esperanza’s sister even gave the money back afterward because she apparently had seen the light.