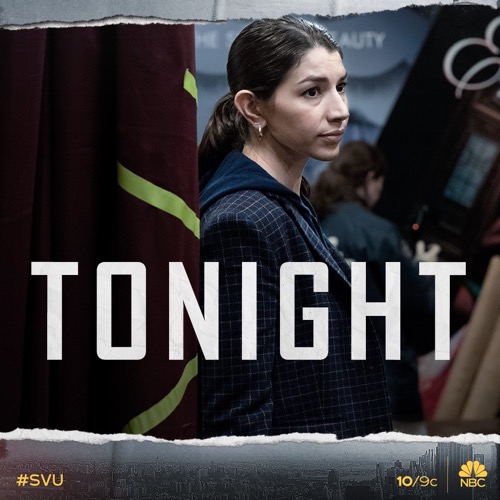 Tonight on NBC Law & Order SVU returns with an all-new Thursday, March 26, 2020 episode and we have your Law & Order SVU recap below.  On tonight’s Law & Order SVU season 21 episode 17 “Dance, Lies, and Videotape,” as per the NBC synopsis, “An ingénue ballerina discovers she’s been secretly videotaped for a pornographic website.”

On tonight’s episode of SVU, we opened with seeing a ballet practice, the dancers are getting taken to task for their lackluster performance, especially Tina, it’s her first solo and Delia, her first performance with them; it’s their manager’s idea of a pep-talk, he says if they don’t improve it will be their last performance. Delia is upset, Brad tries to make her feel better, he encourages her to walk away somewhere in private. He takes her to a dressing room backstage, in private, the two make out.

Delia is also a dance instructor for young children, she is at class and is called to the side by the owner who tells her that she likes her, and what she does on her own time is her business, but she can’t have that around the kids. One of the Mom’s showed her a video of her, apparently, the dads have all seen it already.

Delia meets with Amanda and Olivia, she tells them Brad and she are not a couple. She has texted him, he hasn’t answered her, he is in rehearsal and she needs their help to get this taken down. She already got fired from her teaching job, what if the National finds out. Olivia assures her they are going to do everything they can, but once it goes viral it is difficult. Amanda asks if she is sure that Brad had nothing to do with this, she says she is positive. Great, then Amanda and Olivia want to talk to him.

Momentum Fitness, Monday, March 2: Amanda meets with Brad, he says he has been busy, the reason for not answering and acts surprised to hear about the video. He says there must be a camera in the studio, a lot of people hook up there.

Olivia goes to meet Allister at the dance studio and advises him of what happened and tells him this is a criminal offense. He tells her that he hopes to keep this private, he is opening this week starring Brad and Delia. In the secluded room where the deed happened, there was a wall mount camera, but it has been ripped off the wall.

Pornmonger Offices, Monday, March 2: Olivia and Dominik drop by, after flashing their badges the man there agrees to take it off their servers, but it is all over the internet.

Amanda goes to see some of the other women, so does Katriona, and shows them the videos.

Olivia is at the studio, Allister introduces her to Sasha, the choreographer, who says boys will be boys. Olivia tells him this is serious and the boys could be facing prison time. She advises him to find some understudies.

Office of the District Attorney, Tuesday, March 3: Dominik and Olivia meet with Edward, his dance buddies told them it was all his idea and they are willing to testify. Edward says this is total crap, everyone knew about it, even Sasha, and he is being made the fall guy. Olivia tells him to start explaining and start with Sasha. They showed the videos to him and he would watch them like they were auditioning for him.

Amanda and Katriona go see Tina, one of the dancers, she tells them that there is no video of her because Sasha deleted in return, she had to do the same thing to Sasha that she did to Jason in the video. Amanda tells her that is rape. Tina says Sasha has seen all the videos and he picked her. Tina goes to do her solo, Amanda tells Katriona that rape has been such a culture for this company that they don’t even realize it anymore. They have to try and establish a pattern.

Someone ran Delia’s image through facial recognition, she has gone viral. Amanda and Olivia go to see her and try to calm her down. She is worried, thinks the National is going to fire her. Olivia tells her that Sasha knew everything, Delia is surprised. She says no way, if they go after Sasha, she is out, he is the choreographer, he does whatever he wants.

Pro Athletes Physical Therapy, Wednesday, March 4: Katriona goes to see one of the dancers, he says he doesn’t want to talk, he is hanging on to his job by a thread because of his injury, but he does say that Sasha is a pig.

Bronxville Eating Disorder Rehabilitation Centre, Wednesday, March 4: Olivia and Amanda go to see one of the former dancers, Rose, they tell her they are looking into a company-wide pattern of sexual abuse. They ask her if Sasha is the reason she left the company, she says he is the reason she is there. Jason made a sex tape of her, Sasha got it and said he can make it go away if she did the same thing to him that she did to Jason. She did. She only told Allister about it, he said that he would help her, but she could do a lot better than Sasha. Every year, at the gala auction, dinner with the prima ballerina is the top item, but what is expected is not just dinner. Allister said if he would let her auction her off, he would get Sasha to back off. And if she said no, he would leak the sex tape and blackball her with every other company. She didn’t even dance the premiere, she couldn’t go on that night. And, Allister was right, she hasn’t danced since.

Back at the office, Olivia and Amanda show Dominik the pattern where Sasha is blackmailing the women. Rose is willing to testify. Dominik says at the end of the day this is Rose’s word against Sasha and Allisters. Olivia says they could catch them action, tomorrow night is the gala. They put in a UC and get Allister on tape delivering the goods. Amanda suggests they use Hasim Khaldun, he could pass as an oil-air or venture capitalist.

Tavern On The Green, Friday, March 6: Amanda meets with Hasim, Sasha prepped Allister that there is a diamond tiara level donor waiting to meet him. Amanda gives him the key to his hotel suite and tells him to break a leg.

Hasim meets with Sasha and Allister while the team listens in. Sasha walks away, Allister tells Hasim that he should make one high-level investment. Allister tells him the final item on the auction is a private dinner with the prima, Hasim says he heard it is more than dinner, Allister says the good thing about a ballerina is wherever you lead they follow. Hasim asks if he could make a pre-empted bid, if he makes a six-figure bid can he take her off the block. Allister says yes, he can have anything he wants for that amount.

In his hotel room, Ashley asks Hasim if he is a ballet fan, he says not really. He thanks her for letting her sponsor her for all that that entails. Ashley says let’s be clear, this is just one night, as sex only. Hasim says absolutely, she is in charge. Ashley tells him to unzip her, Amanda opens the door and shows her badge, Ashley says was not her idea.

Hasim, Olivia and Amanda head to the gala and arrest both Allister and Sasha.

Olivia goes to see Delia, tells her that both Allister and Sasha will face prison time, so will Jason. Brad and Edward were fired, they are filing a suit for wrongful termination. Delia bets they will get their jobs back. Olivia asks her if she will consider going back, she says she spent her whole life in that world, to leap high, spin in mid-air, the only dream she ever had. But now, she imagines dancing on stage and the only thing she thinks about is everybody leering at her on the internet, and that is never going to go away.