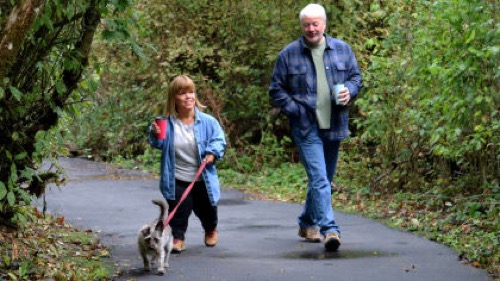 The nerves set in when it comes time for Amy to tell Matt that she’s engaged. Zach is shocked about the news of his mom’s engagement and can’t believe that she forgot one single request.”

Chris and Amy are taking a walk, the morning after their engagement; they are both still beaming over the special occasion. During the walk, she asks him if he ever thought she would say no. He says he wouldn’t have asked if he didn’t think she was ready. She tells him she is very happy, he says he is too. She is relieved now that they have a new house. Right now, she has 30 years of stuff to move, she would like to move in first, and then have Chris move in. Both agree that life together will be an adventure. She doesn’t know how she is going to tell Matt, does she need to tell him? Matt is hoping her children accept him into the family. Amy thinks they will do well, there is just an adjustment period for all of them and she is prepared for it.

At Zach and Tori’s house, Jackson is having fun goofing around. Zach wants to have an end of summer party, she doesn’t want to help at 7 ½ months pregnant. Although, she would prefer planning it because when Zach planned Jackson’s birthday party, they ran out of food. Tori says she is not doing any of the work, he needs to find someone else to help him. Zach says he has 20 people invited. Zach is a minimalist, he thinks when he plans parties they don’t get anything they don’t need. He obviously forgets that they ran out of food at the last party.

Matt is building a stool for Zach, see they can step on it to get into the crib when the baby is born. Caryn wants to grow grapevines, it’s a low fruit so Matt can help tend. She has done a lot of research on it and is excited. She wants to take on projections on her side, and Amy can do whatever she does on her side.

Amy calls Matt, she tells him over the phone that she is engaged. He congratulates her and tells her that it is exciting news. He seems happy for her and says he has no reservations against it. Matt thinks Chris brings a lot of good to Amy, better than him, he has a good temperament for Amy’s life. He says he is very happy for her. Amy seems happy that Matt gave his congratulations. She thinks he is glad that she is moving on so he doesn’t have to deal with her. Matt tells her that he hopes he gets an invite when the time comes and when she nervously laughs, he says they will cross that bridge when they get there.

Amy drops by to see Tori and Zach, brings them some coffee. She is nervous to tell them the good news. Amy offers help for Zach’s party, Tori tells her she is not allowed to help. Amy then says the house is closing in a week, and there is other news she has to tell them about. She blurts out, I am engaged. Zach doesn’t look thrilled, Tori looks uncomfortable. Amy is surprised, she thought Zach would at least say congratulations. This is literally a shock to Zach, he looks surprised. Amy shows off her ring and tells them they are looking at 2021 for the wedding, nothing big. Amy says she hopes they can continue to welcome Chris into the family. Zach says this is the one thing that he doesn’t want to talk about on camera and she went and did it on camera. Zach asked both parents to do this in private and Amy couldn’t remember, he is not going to take this.

Caryn and Matt test the soil and it is not a good grade for grapes. Matt tells Caryn about the engagement, he says he is surprised because with Chris not being married before, he thought he had an inversion to it. He says they are going to have a long engagement, then he tells her that when their time comes, he promises he won’t drag it out. Caryn says she wouldn’t need a big wedding, Vegas maybe!

Amy feels bad, she forgot that Zach had asked not to discuss her or Matt’s relationships on camera. She apologies to Zach tells her that she realizes that she caught him off good. He says he asked her not to do, she says she knows but it was so long ago that she forgot. He thinks she ignored it. She apologizes again and says she didn’t mean for that to happen. He says its ok, he is happy that she has somebody to be with. They hug each other.

Zach and Jackson are playing in the playground when Matt drives up and tells him that he is trying to finish the stool for the party. They talk about Amy and Chris, Zach says they are happy about it, but nobody is going to jump up and down with excitement. Matt knows it’s a tough process and not easy. But he thinks Chris is good for her. Zach is happy that Matt had good things to say about Amy and Chris. But Zach wonders why Matt couldn’t be this agreeable twenty five years ago.

Zach is checking the grill to see if it works, he asks Tori to teach him how to use it. She gives him a step by step tutorial. He says he hates dealing with gas, it’s so dangerous.

Amy is having lunch with her friends, she tells them about how Chris asked her to marry him. Hugs all around, the two women are very happy for Amy. She tells them that she is so looking forward to where this will take the two of them.

Zach is getting all the last things ready for the party at his house. Tori has already texted all her girlfriends saying this is not her party. People are starting to arrive, and he has no food out yet. Matt and Caryn, Amy and Chris are also at the party. Amy knows this is the new normal and she has to adjust to it because she wants to be there. Jeremy was excited about her engagement and wishes his mom all the best.

Caryn makes a face when she sees Chris and Amy walk in, but then as they approach she hugs Chris and congratulates him and Amy. Zach turns on the grill and a big flame comes pops up and knocks him to the ground. Zach says he did exactly what Tori told him to do, Chris gets up to help him and so does Tori. Zach turns around and asks if someone else wants to do this.

Caryn congratulates Amy again, looks at her ring. They start talking about the house and Amy gets a little sad. It’s hard to think about the memories. Zach is happy for both Amy and Chris, that they are engaged and she found a house off the farm.

Zach is happy about his party, and he knows now the value of having a little too much and not enough. Matt gives Zach and Tori footstools, one for the parents and one for Jackson. Zach thanks everyone for coming to the party, he loves seeing all the kids having a great time. Zach decides that he wants to do a group photo.

There are a lot of big changes in their family, Amy believes it is important for her and Matt to stay close to the kids.