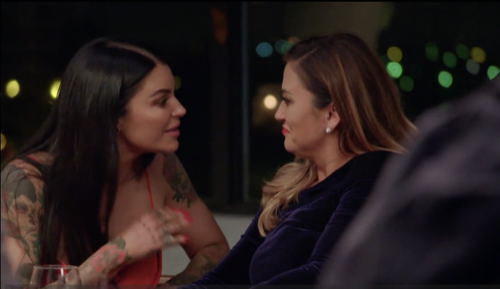 The time has come to travel to Sydney for the next phase of the experiment. The relationship experts is bringing the couples all together to see how they navigate the social environment and determine whether or not it will affect their relationship with each other as a couple. Will they judge their own relationship based off of everyone else’s? Will they lean on each other? The experts took as it a great sign when they first saw a couple strategize about their up and coming meet with the others. It showed that they were working together already. It also seemed like a great start to the night because things got better from there.

The couples all began arriving together. The one that seemed the most loved up was Stacey and Michael. They were the first couple to consummate their marriage and it showed. They were confident around each other. Their intimacy was easy to read and so they appeared the best couple so far while the worst appeared to be David and Hayley. David and Hayley didn’t even arrive together. They came separately with David getting there first. He said he didn’t want to talk about the situation with Hayley absent and so he handled things quite bravely. The others thought he seemed okay.

David hadn’t thrown his wife under the bus in spite of the opportunity he had to get the first word in on their apparent separation. He could have told them about the many fights he had with Hayley and how they knew they couldn’t be happy with each other. He could have said anything. He could have made things up and he chose not to. David, or Dave as he likes to go by, had chosen to be a gentleman. He didn’t say anything and Hayley didn’t know he didn’t say anything. She, therefore, walked into the party very nervous. She was worried what the others might have been told and so she was fast in getting her side in.

Hayley took the girls aside to tell them what happened or at least what she thought happened. She told them how she had jokingly told Dave he didn’t make enough money and how he became offended because he thought she was being serious. She swears to them that she didn’t mean it. She was just trying to tease him and she in turn got offended when he accused her of being a bad person. Hayley told the girls everything. They told her how Dave was a true gentleman when he came in and that he didn’t disparage her or mention the fight. Hayley came to see Dave in a new light because of what he did. And that warmed her up to her husband.

Hayley soon started flirting with him. She came up with an excuse for why he wasn’t wearing his wedding ring and the more she tried to attach herself to him was the more he began distancing himself. Dave felt she was being fake. He didn’t want to play happy families if that wasn’t what they were and so he was pushing her away right as she was wanting a second chance. Hayley admitted to some of the others that she did want to pursue things with Dave. She liked him. She wanted to see if they could make it work and all she really needed in return was a sign from him that this was what he wanted too.

Dave talked to some of the guys. He didn’t seem like he was all that interested in wanting to give Hayley a second chance and they weren’t the only couple with a disconnect. The experts noticed the problem with Tash and Amanda. Amanda was putting on a very brave face and she was trying to be there for Tash. It was Tash that just didn’t seem to enjoy her attention. Tash and Amanda came in strong and then basically separated. They went off in different directions. They didn’t really talk throughout the night and Tash got flirty with the other women the more she drank. Amanda knew she would act like this.

Amanda wasn’t surprised when she saw it happen. She had no time for women who played games and that included Hayley. Hayley and Amanda talked. Hayley told her that Dave was what she always wanted on paper and that there was still this problem between them. Amanda called her out on saying she wanted a nice guy, but not knowing how to enjoy having a nice guy and so that little conversation “inspired” Hayley. She later came on to Dave. This was the first time she has ever shown such an interest in Dave and so he was thrown. He had no idea where this behavior was coming from. He thought Hayley was being too much and so he withdrew even further.

Dave complained about her behavior to the others. He told them how it came out of nowhere and that he didn’t like it. He was turned off. Dave pulled away from Hayley and Hayley soon got in an argument with Ivan. Ivan can sometimes come across as a jerk. He ticked off Hayley and she told him to leave her alone. Her interaction with Ivan had upset his wife Aleks. Aleks hadn’t liked seeing that other side to his personality and funnily enough one of Ivan’s greatest fears is to embarrass his wife. Which he did. He did so with his actions and she hadn’t liked it. Aleks and Ivan’s relationship troubles are a new issue. The experts were sorry to see it.

The experts threw this dinner so that the couples could figure out what they want/need from each other. There were some like Poppy who was jealous seeing everyone so loved up because that wasn’t the sort of relationship she has with her own husband Luke and then there were some like Hayley and Dave who couldn’t get along no matter how much they tried. The experts saw it. They also talked about it amongst themselves and what they noticed was both good and worrisome. So, they decided to check in with the couples. The experts later brought in all the couples and they talked with them quite openly about what they were feeling.

Amanda and Tash discussed their problems. Tash confessed she wasn’t as attracted to Amanda as her flirtatious let on. They also slept apart for most of their honeymoon and so it felt like rejection. The couple also disagreed about the littlest of things. They disagreed on when they should sleep together as well as what to call their relationship. Tash called all the shots in the marriage and there was some frustration coming from Amanda. Both of them still ended up choosing “Stay”. They wanted to work on their marriage and they weren’t alone. There were a lot of couples that chose to stay.

They had made great connections. They were attracted to each other and they genuinely seemed to like each other. But Poppy was the first to say her wedding day was a bit of a blur. She was having an out of body experience and so her time for that day was vastly different from Luke’s. Luke remembered their wedding day as being something beautiful. He even thought it was a great sign going forward and he came to be disappointed. Poppy started withdrawing from him on their honeymoon. She missed her kids. She missed them so much that she self-sabotaged in her relationship with Luke and so it came as a shock when she decided to stay.

Poppy had wanted to give their relationship another chance. She wanted to believe in the experiment as did everyone else. Aleks and Ivan chose to stay. She was willing to overlook certain signs she found troubling because she found she enjoyed the respect Ivan personally has for her and she thinks their relationship can work. But the biggest issue of the night was Dave and Hayley. They fought over everything and have called each other inconsiderate and rude. They also talked about so alike they were. They thought they should hold onto the positivity and so both Dave and Hayley chose to stay.