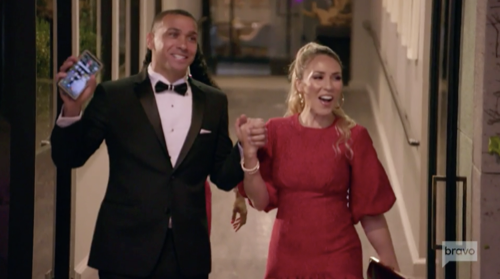 Tonight the Bravo series Married to Medicine Los Angeles airs with an all-new Sunday, May 10, 2020, season 2 episode 2 and we have your Married to Medicine Los Angeles recap below. In tonight’s episode titled, “Prepare For Backlash” as per the Bravo synopsis, “The last call at Jazmin’s cocktail party brings a surprising resolution between her and former nemesis Imani.

With Britten’s best friend Contessa and her ATL friends in town, Mack throws an upscale birthday bash for Britten that takes her by surprise.”

Tonight’s Married to Medicine recap begins now – Refresh Page often to get the most current updates!

All of the ladies get into a fight at Jazmin’s villa. Imani and Jazmin leave to talk alone. Imani shares that she has been betrayed so many times. Jazmin thinks they need to work on their friendship. Several massage professionals arrive at the party to pamper the ladies. They are all getting along now.

The next day, Jazmin wakes up out of it after the party while Shanique gets her son ready for school. She is having a hard time balancing things lately. Robert just wakes. Before she leaves with the kids he tells her to take some deep breaths. In the car, she tells them she thinks she is going to move onto real estate. Her kids think she should stay at her current job.

Kendra and Hobert open their garage. It is full of boxes. She is stressed because she thought that breastfeeding would help her lose weight and she hasn’t. They just had a baby 5 months ago.

Britton is coming her child’s hair out. He is freaking out. She loves her kids but they are exhausting. She is excited however, her husband is throwing her a birthday party. She wants details but he isn’t sharing. A little later, her friend shows up. They sit around and talk.

Everyone arrives at the party for Britton. Kendra is determined to have fun even after Heavenly made comments that Kendra’s husband might have a small penis because he is of Asian descent. Heavenly is having a hard time in her heels. The men are drinking and toasting, having fun. Heavenly gets mad when the ladies laugh at her. Kendra is polite to Heavenly when they see one another. She even meets Hobart.

Imani is talking to the ladies. Her husband is never home. They don’t understand why they are married.

Everyone keeps asking Mack when Britten will be arriving. Meanwhile, she is on her way to the party. But she and her friend are lost. Mack calls her to find out what is going on.

After she arrives and sees her party, Britten is thrilled. She cannot believe Mack did all of this.

The ladies talk about how Imani’s husband is away. They wonder if something is wrong. They also noticed she isn’t wearing her ring. Britten thinks she will share when she is ready and they need to stop speculating. The party gets started with toasts and dancing.

The next morning, the ladies who stayed at Jazmin’s wake to a big breakfast. Toya loved coming to LA. There was no drama and a ton of fun. The rest of the ladies head out on the rooftop to eat. They all sit. They love her property.

The conversation steers to Heavenly sharing that usually beautiful people are not seen as bright by assumption. Jazmin looks offended. Imani reminds her to be appropriate. The ladies then question Jazmin about her husband being away working. Imani is also worried even though her husband hasn’t been around. Britten tries to turn things positive. She thanks them all for coming.

Later, Imani and Britten meet for drinks. Imani made it into Essence Magazine as well as her husband. She is happy. Britten brings up how all the ladies are worried about her relationship. Imani doesn’t care, she and her husband have things to accomplish. Meanwhile, Jaz and Shanique eat and have shots while talking about Imani. Imani tells Britt she doesn’t want to share that her husband is into marijuana dispensaries. Shanique thinks they need to call Imani out.