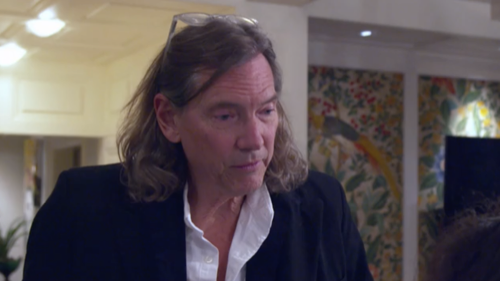 Tonight on Lifetime their hit series Marrying Millions premiere with an all-new Wednesday, September 23, 2020 episode and we have your Marrying Millions recap below.  On tonight’s Marrying Millions season 2 episode 8 called, “Rough Waters Ahead,” as per the Lifetime synopsis, “Bill tries to adjust to Bri’s mother Sharon moving into the house, but things quickly go south, leaving Bri torn between Bill and her family. Desiry’s world is turned upside down after Rodney reveals a devastating secret that he’s been keeping from her.

Erica tells her family about her engagement to Rick, but their response causes serious waves. After a tense argument with Dani, Donovan warms to the idea of proposing. Kevin drops a bomb on Kattie.”

Brianna is often caught between her boyfriend and her mother. Her mother Sharon moved into the house Brianna shares with her much older boyfriend Bill and Bill has a problem with it. He didn’t want Sharon to move in with them. He wasn’t asked before Brianne made that decision on her. Bill just wanted it to be the two of them and it’s not like they were married. Sharon was not his mother-in-law. She was not family. She was practically a stranger to Bill and Bill has been complained about her. It seems Sharon has been enjoying herself since she moved in. She brought her dogs with her. Her dogs left little presents on Bill’s Persian rug. The one in his office and he didn’t like that.

Bill also didn’t like catering to Sharon. Sharon didn’t know how to work his coffee machine. It was one of the complicated expensive ones that she has never seen and so she asked Bill to make her coffee one day and it was like the end of the world for him. Bill hadn’t catered to other people. He expects people to cater to him and that’s how Sharon ended up making breakfast for everyone one day. She came downstairs one morning. She was hungry and Bill basically told her that he wasn’t going to be making her breakfast. Therefore, she decided to make breakfast and Bill was ready to volunteer his plate until he saw Sharon’s cooking style.

Sharon had a minor cough. She coughed as she was making breakfast and Bill refused to eat the meal because he said germs had gotten too near it. Bill was being overdramatic in his dealings with Sharon. It was starting to grate on Brianna. Bri asked her mother to move in because her mother was going through something right now and she wanted to support her. She didn’t think her boyfriend would have a problem with it. Then again she also thought Bill would be welcoming. She really didn’t seem to know how petty Bill could be or how childish because it’s not like her mother committed any great big sin. It also not like her mother was going to be living with them permanently.

It was just for now. Bill was not being understanding and it would eventually get to Bri one way or another. Unfortunately, Bill and Bri weren’t alone in having relationship problems. Kevin and Katie were going through something as well. Which surprised Katie. Katie noticed that Kevin has been more attentive to her since that horrible dinner with her friends and in which he was confronted by said friends. They told Kevin that he wasn’t being good or kind to Katie. They thought he could do better and he seemed to be doing so after the confrontation. Kevin even invited her to walk on the beach with him. He would never have done that before.

Kevin wouldn’t have taken time out of his busy schedule to go walk on the beach with his girlfriend. He wouldn’t have prioritized her and so Katie thought their relationship was improving. She was under this misconception right until Kevin told her why he invited her to the beach. He invited her to the beach because he was moving to Las Vegas and this is how he breaks the news. Kevin apparently still wanted to date Katie. He was ready to try out long-distance and so that was the nice gestures were about. He was doing his best to convince her to continue to see him. Kevin still won’t say that he loves her or cares for her and yet he expects her to make herself available for him as they discuss long-distance.

Another couple in trouble were Desiry and Rodney. Rodney has made it known that he wants to sleep with Desiry before getting married and she doesn’t believe in that. She doesn’t believe in premarital sex. She wants to get married before they sleep together and she hates it when Rodney tries to pressure her. He does that whenever they’re together for a while. Rodney has made it known that sex is important to him and so that has led to doubts. Desiry doubted if Rodney was faithful to her. She also has her friends in her ear telling her that he wasn’t faithful and so she decided to ask Rodney.

Desiry asked Rodney while they were in the hot tub. She asked him if he ever cheated on her and he did. He cheated on her six months ago with someone else. He said it ended as soon as it began and that he’s been truthful for the last six months. Not that Desiry cared about the last part. She couldn’t get over how Rodney was unfaithful to her and so she threw her drink in his face before storming off. It was pretty hard to storm off in a thong, but she did it and she did not turn back. Desiry said Rodney trampled over one of her core values. She wasn’t sure if she wanted to forgive him much less talk to him and so their relationship might very well be over.

Rick and Erica were doing better for a while in terms of the others. They had recently got engaged and it’s supposed to be the happiest time for them. Only it wasn’t because Rick didn’t get Erica’s father’s approval before asking her to marry him. Erica and her family were traditionalists. They would have preferred it if Rick sought permission to marry Erica and the fact he didn’t have cast darkness over their engagement. Erica’s father was upset and her whole family agreed with them. They were even willing to miss out on Erica’s wedding because of the disrespect. They said they weren’t coming to her wedding and that her father was not going to be walking her down the aisle.

Erica’s family had upset her so much that Erica returned Rick’s ring. She couldn’t get married without her family’s approval and her family now thinks Rick looks down on them because he couldn’t bother to call or visit her father in person to ask for Erica’s hand.

And so most of the relationships on tonight’s episode were in trouble, but the one highlight is Donovan and Dani. Dani managed to convince Donovan that he should marry her and so he bought a ring. And now he just has to propose.