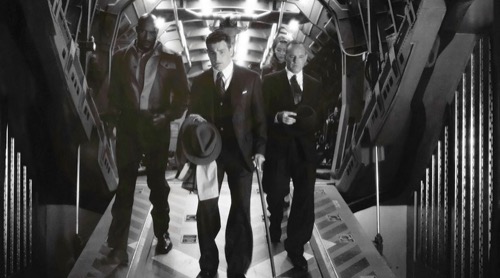 With a chip on his shoulder and a genre-bending glitch in his system, he’d set into motion a chain of events that would hopefully preserve the timeline as we know it and ensure those pesky chronicoms get the ending they deserve.”

Coulson is handcuffed to a desk. He recalls the day Daniel Sousa, the first agent of SHIELD, to die. Sousa is questioning him. Coulson mentions Stark and tells Sousa how he came to the base to investigate. He can help him. Sousa throws him the keys to uncuff himself.

Coulson calls Enoch, who is hiding out as a bartender. He needs him to get a message to the Zephyr. He connects Coulson to the team. Their mission. Deke and Yo-Yo time jump from the 30s to the 50s. They arrive at a home and let themselves in, guns at the ready. Yo-Yo finds a body. Of a man upstairs while Deke is struck from behind downstairs and taken. Yo-Yo runs downstairs and sees a fedora on the floor. A man takes off in a car. The package is now in SHIELDs possession.

Sousa and Coulson get on a train waiting for Coulson’s contact. Coulson is worried but doesn’t share that. The team is a no show.

Enoch tends bar listening to a man who is drinking. Yo-You calls him. He offers to join the team but she just says no, she needs to be connected to the team. She gives her location and details about Deke, leaving Coulson high and dry.

Coulson sees his guy and grabs a briefcase. He and Sousa head down the train, not realizing men are watching them. Coulson has received a fake device to buy some time. Meanwhile, the team looks at the real tech device.

Coulson and Sousa make small talk. Sousa wants to see the device but Coulson tells him its for Stark’s eyes only. Sousa heads to grab a drink. Another man sits and tells Coulson they need to talk. He has a proposition for him.

The man wants Coulson to give him Earth. Meanwhile, a lady approaches Sousa at the bar. They sit and have a drink. Coulson tells the man no deal. The man threatens to kill Sousa now even though they both know he is fated to die later in the night in L.A. Sousa figures out the lady is just trying to distract him. A man approaches and they fight. The team comes out of nowhere to help. Sousa wonders who they are. Mack and Johnson introduce themselves and share they have the package.

The team doesn’t tell Sousa much more and he doesn’t ask again. May arrives. She landed a plane on top of the train. May isn’t herself. Jemma takes her away. The team tells Sousa they can give him the package but they need Deke. Sousa shares that he thinks SHIELD was infiltrated by Hydra. They already knew that.

Deke meets Wilfred. Deke pretends he is a salesman and that is why he was at the house. They want a gadget. He plays dumb. Wilfred shoots one of his own.

Mack and Sousa talk about how they cannot save Sousa became they don’t know how it will impact history. Sousa is determined to fight. Meanwhile, in desperation Deke tells Wilfred he saved him in 1931, calling him Freddy. Wilfred puts the gun down. He lets Deke go.

Jemma and Yo-Yo check in May. It seems she may have had a panic attack. Back at the bar, Deke phones Enoch to talk with the team. He tells them where he is.

May tells them he first happened when they set off the gas canisters. This time though she was more confused than full of panic. It happened after she shook Sousa’s hand. Yo-Yo thinks she is feeling others’ emotions. She tells them she felt something else too when she was near Sousa. She felt the need to run. As she shares this, Mack tells the rest of the team they will try to save Sousa who has taken off.

The team gets on the plane. Sousa arrives at a hotel. Wilfred’s man arrives to kill him. Sousa hides. He passes the briefcase to a man posing as hotel staff and is then killed. Coulson recalls how he died a hero. The man didn’t get the package, however. Coulson shares that he actually shot him but not with. bullets. But then Coulson was shot by the man looking for Sousa. Luckily, he is an LFD.

They get on the plane with Deke. Coulson is ok and May confirms that. They hope to be heading home. Sousa comes on the plane and Coulson finally shares the truth. History says he is dead and now they don’t know what to do. They show him the plane.

The man who propositioned Coulson on the train tracks down Wilfred. They have a common enemy.