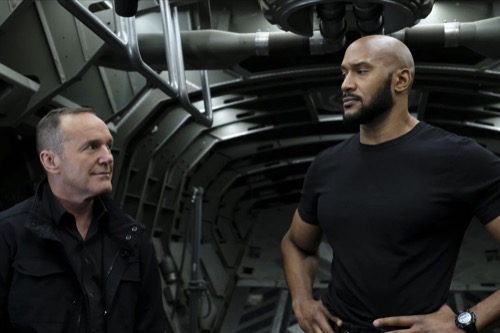 Tonight the ABC series Marvel’s Agents of S.H.I.E.L.D. premieres with an all-new Wednesday, July 29, 2020 season 7 episode 10 and we have your Marvel’s Agents of S.H.I.E.L.D. recap below. On tonight’s episode called, “Stolen,” as per the ABC synopsis, “After Enoch’s sacrifice propelled them out of the time storm, the team arrives back in 1983 where Nathanial and Kora are hard at work building an army of hand-selected anarchist Inhumans at Afterlife.

When the agents split up to cover more ground, Daisy is tasked with protecting Jiaying and is compelled to confront her mother for the first time since her death; while the others quickly learn they’ll need to face yet another supercharged former enemy in order to stop Malick.”

The team saved themselves from total destruction. However, they were stuck in the 80s and a lot has happened. The team that Deke put together was now at the Academy for SHIELD agents. It turns out Deke didn’t have the authority to deputize them. They were going to have to go through the Academy like everybody else and not everyone could make it to meet up with the team. Roxy did. She told Mack what’s been happening since she last saw them and she didn’t ask any pesky questions about how Coulson came out of the tv. Roxy kept her greetings short. She told the team that several projects were up and running for SHIELD. And she didn’t know that these same projects weren’t supposed to be on the table until much later on.

The team has messed with the timeline. The timeline itself was coming apart and now the same people that destroyed it has to fix it. The team was later visited by Jiaying. She was their opportunity to fix what they broke. Jiaying needed their help to save the Inhumans from Nathaniel and Kora. The two had joined powers and were wreaking havoc in the Afterlife. They were stripping powers from the Inhumans. Their plan was to give these powers to other HYDRA members and they were recruited based on the future knowledge that Sibyl was providing them. Sibyl plus the Chronicoms were actively working with HYDRA to defeat SHIELD.

Jiaying was the team’s way of undoing this alliance. All she wanted in return was her daughter. Her daughter Kora. Kora was supposed to have died back at Afterlife and after her death, her mother was supposed to have left Afterlife in grief. It was as Jiaying was traveling doing charitable work that she met her husband. They had Daisy together. They were happy until they weren’t and so Daisy wouldn’t be here without Kora’s death. Daisy didn’t even know she had a sister or that her mother had another daughter. Daisy was angry at her team for withholding this information from her, but they were focusing on the task and no one had time for Daisy to try and reunite with her family.

They still didn’t have time. Mack told Daisy that she was going to bench for this one. He had promised Jiaying that they would find Kora and so Mack wanted to send Coulson. Coulson’s greatest superpower is that he’s expendable. He could die and be brought back. Coulson went with Jiaying’s friend who could travel fast and sadly they walked right into a trap. A trap that Nathaniel set for them. Nathaniel has access to the Time Stream and he was using it to plan his every move. He trapped Coulson. He now has him in his custody and the team had no clue. They were off facing other possibilities. Like what if Fitz is dead. Simmons has tried contacting him and nothing has ever worked.

Simmons was also told about those few moments she didn’t have the chip in her neck. She was told that she was so sad at the time and that made her afraid because she wanted to know if she chipped herself so that she wouldn’t have to remember Fitz’s death. Simmons talked it over with Deke. He was the only one she could talk to now that Enoch was dead. Enoch killed himself to save the team and that was making Simmons feel even lonelier than before. She wanted to talk to someone. She wanted to connect and all she had was Deke when what she really wanted was Fitz. And she wasn’t the only one in pain.

Daisy wanted to know her mother. The one she met in the original timeline was all bitter and vengeful. This one was still a good woman. A kind woman who wants to save her daughter and so Daisy wanted to talk to her. She was also persuaded to do it by Daniel. Daniel didn’t know the full story or the baggage that Daisy has been walking around with ever since. He just knew that Daisy would have regretted not speaking to her mother while she could and so he gave her the permission to do it. It’s not like Mack could have stopped her anyway. Mack got worried when Coulson wouldn’t check-in and he went looking for him.

Coulson meanwhile was shown around. He was shown how Nathaniel was stealing powers and that he was giving said powers to former SHIELD members. Coulson met a younger Garrett. Garrett took Gordon’s powers to teleport and he took Nathaniel on a little adventure. They were off doing whatever it is that evil people do while Mack was breaking in. Mack was trying to help Coulson and, with him away, Daisy talked to her mother. Daisy revealed that she was from the future and that Jiaying helped her in the future. Daisy also explained how Nathaniel took his powers from her. Nathaniel stole future knowledge and that’s how he found out about Afterlife.

Daisy talked to Jiaying. They connected and they were still talking when May phoned in. May said that Garrett and Nathaniel were in the bunker. They had taken Gordon’s powers because they wanted to use them to break into SHIELD’s defenses and so the team prepared. They thought they would be assaulted. They didn’t know that Nathaniel had his own plans. Nathaniel came across Daisy with Jiaying and he revealed their real connection. He then fought Daisy. He was winning and so Jiaying tried to drain his powers and he killed her. Daisy then attacked Nathaniel and he ran off before she could kill him.

Garrett meanwhile was floating. He found Simmons and he kidnapped her. The two also stole the Zephyr and so that was what Sibyl wanted all along. Sibyl got Simmons for the information in her head and the Chronicoms got the Zephyr. A time-traveling ship. There’s no telling what they’ll do with that ship and the team’s best bet is Deke who hidden on the ship. He had his headphones on and so he had no idea anything was wrong until the ship started to move.

Only they left behind Kora.

Kora allowed herself to be captured.