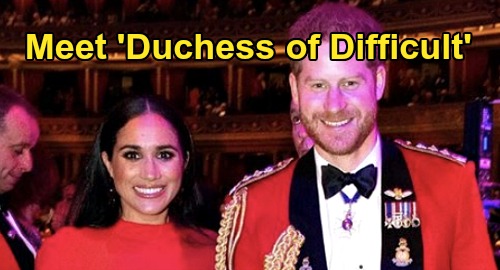 British royals news reveals that after Meghan Markle married Prince Harry and became a senior member of the royal family, she was given some rather awful nicknames by those working in the palace, so says a royal expert. In his research for his book called “Kensington Palace: An Intimate Memoir From Queen Mary To Meghan Markle,” author Tom Quinn spoke to various individuals who worked for the royals throughout the years.

Quinn discovered that a couple of very unflattering nicknames – “Duchess of Difficult” and “Me-Gain” – were apparently developed by royal staff members, and not by the British tabloids, although the tabloids did pick up the nicknames and run with them, using them against Meghan Markle.

Quinn told Fox News that there were members of the royal staff who felt that Meghan was “too demanding,” “spiky,” and “feisty,” and that she would call them in the middle of the night and send emails at 5am.

It seems that some staff members just weren’t accustomed to someone who acted so differently. Quinn went on to say that “it was felt that she was demanding.”

And apparently, the situation only got worse with the British press and the name calling after she spoke out against the press. This occurred during the 2019 documentary called “Harry & Meghan: An African Journey,” and Meghan Markle admitted that she hadn’t been prepared for the scrutiny by the press that she was subjected to after she started dating Prince Harry.

According to Quinn, Meghan made a big mistake by trying to explain herself, which just made the situation worse. It’s a well-known adage that royals have followed a basic rule when it comes to the press – never complain, never explain.

It seems that Meghan didn’t follow that adage and it may have caused the press to get fiercer than it otherwise would have been.

And back to the palace staff, which is where the disparaging nicknames came from in the first place, it seems that some of them are relieved by Prince Harry and Meghan Markle’s move to North America. Yet Quinn says that other staffers are concerned about Harry and Meghan’s next move and whether it could embarrass the palace even from afar.

And if Meghan Markle really believes that her difficulties with the press are behind her, then she might want to think again. Sure, she and Prince Harry may be quite far removed from the British press at this point, but the Los Angeles paparazzi can be brutal, and Harry and Meghan have yet to experience the paparazzi in full force since they’ve only been in the city during the coronavirus lockdown.

Meghan no longer has to contend with the royal staff or the British press on a daily basis, and perhaps the American press will be more accommodating and kind. Keep checking back with us here at CDL for all your British royals news and updates.