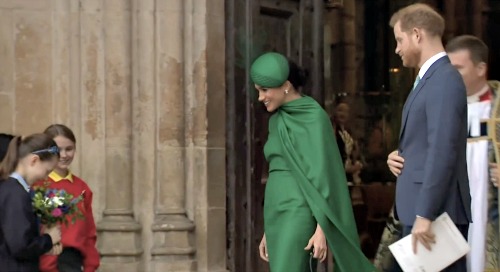 On Saturday, Victoria Mather aka “Vanity Fair’s royals watcher” appeared on MSNBC Live to speak about Meghan Markle. During the discussion, Mather speculated that the Duchess of Sussex’s biggest issue was being in Kate Middleton’s shadow. The royal watcher claims that Meghan simply can’t handle being second-best.

No official reason for Prince Harry and Meghan Markle’s decision to step down from their royal duties has been given. In various statements, there have been hints of the reason, but nothing concrete. This leaves the public and media outlets left to speculate on what really prompted the decision.

In one comment, Harry did say there was a lot of hurt involved and they stepped down as a last resort. However, more recently, Harry met privately with Queen Elizabeth and reportedly thanked her for welcoming Meghan into the Royal Family.

The royal watcher explained that in her opinion, Meghan didn’t want to spend the rest of her life being in Kate’s shadow. She also couldn’t handle the possibility of Kate becoming Queen one day while she remained the lesser role of Duchess.

“I don’t think Meghan Markle wanted to spend the rest of her life looking at Kate Middleton’s back as she sat in the second row to the future queen… she didn’t want to be second best.”

It was also stated in the interview that while Kate and Meghan appeared at joint engagements, the Duchess of Cambridge allegedly didn’t even acknowledge Meghan. If this is accurate, then it seems the royal rift isn’t even close to coming to an end.

‘5 Clicks Up From Trailer Trash’

The interview, which was on live television, came to an abrupt end after Mather made a rather bold statement. She said Meghan was “only five clicks up from trailer trash.” She also slammed the Duchess of Sussex for disrespecting Queen Elizabeth.

Giving the Duchess of Cambridge ‘the Knife’

Mather claimed that for Christmas, Meghan gave Kate Middleton a present, which was a knife. While this has not been confirmed, if it’s true, was it a special decorative knife or was it making a bold statement? It’s hard to tell until we get more information.

What do you think of Meghan Markle stepping away from her royal duties? Do you agree with the royal watcher about the Duchess of Sussex or is she being too harsh? Don’t miss all our hot royals news here at CDL. We’ll pass along plenty of updates as other Meghan Markle news rolls in.