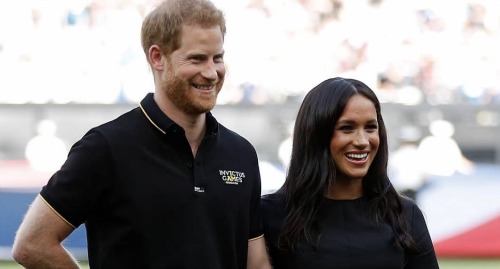 British royals news reveals that Meghan Markle is considering some big plans for her birthday. Meghan’s 39th birthday will be on August 4th, and according to a new report, she’d very much like to celebrate the big event outside of Los Angeles this year – something that could be tricky given the coronavirus lockdown that’s in effect.

As royal watchers know, Meghan Markle and Prince Harry stepped back from their royal duties this past spring and moved to North America – first to Canada and then to Los Angeles, where they’re currently residing in Tyler Perry’s huge $18M mansion with their one-year-old son Archie Harrison.

They seem to be making their home in Los Angeles, but after the extended lockdown period, it seems that Meghan is feeling “cooped up.”

Prince Harry and Meghan Markle have only been seen out of their mansion occasionally during the lockdown, including last weekend when the pair ventured out in a gas-guzzling SUV that raised eyebrows, given Prince Harry’s previous statements about everyone “doing their part” to control emissions and protect the environment.

It would seem that Harry and Meghan have been inside the mansion and the grounds for most of the entire time since they moved there in March.

Well, according to the Daily Mail, Meghan has said that she and Prince Harry are feeling like they need a chance of scenery, at least for a little while, by getting out of Los Angeles.

The source, which is said to be a friend of Meghan’s, said that Meghan may be looking at Montecito, California, as a destination. Montecito happens to be where Meghan’s friend Oprah Winfrey lives and is near Santa Barbara.

The source indicated that Meghan would make sure that anyone attending her birthday bash would be tested for COVID-19 first, and that the gathering would be intimate and would include just her closest friends.

The source reportedly said that whatever Meghan ends up doing for her birthday, it will be “low-key” and that “she doesn’t want to come across as being careless and irresponsible.”

This year’s birthday celebration for Meghan will be quite different from last year, when Meghan celebrated her 38th birthday with a family day at her then-home with Harry, Frogmore Cottage in Windsor.

It was a relatively quiet birthday for Meghan, and this year it seems that she wants to do things up a bit more, although it will certainly be a change of scene for the couple.

We’d assume that all of the people who will be in attendance this year, assuming that Meghan does move forward with a get-together in Montecito, will be friends of Meghan’s and not necessarily Harry’s. Of course, that can’t be helped considering that travel between the US and the UK really isn’t viable right now.

At any rate, it will be interesting to see what Prince Harry and Meghan Markle plan for Meghan’s birthday this year and how it all goes down. Keep up on all the British royal news and updates here at CDL – we’ve got you covered!