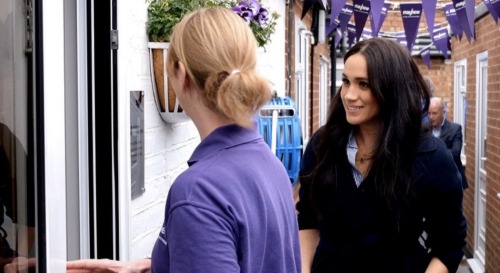 British royals news reveals that Meghan Markle seems to be enjoying being away from the UK and being able to speak freely about issues that are important to her. As royal watchers know, Prince Harry and Meghan Markle stepped back from their duties as senior royals this past spring, and they’re currently living in Los Angeles in Tyler Perry’s Beverly Hills mansion with their one-year-old son Archie Harrison.

Last week, Meghan spoke via video at the Girl Up Leadership Summit during which she urged young women to challenge the status quo and to speak up for what they believe in.

And several weeks ago, Meghan gave a commencement address at her high-school alma mater during which she spoke about racial inequality. Both talks were well-received, and Meghan seemed to be in her element.

Well, recently, royal expert Omid Scobie revealed on the “Heirpod” podcast that Meghan Markle now has more freedom to “speak from the heart” on topics that are important to her. Scobie is author of “Finding Freedom: Harry and Meghan and the Making of a Modern Royal Family,” and he noted that Megan’s speech at the Girl Up Leadership Summit wasn’t a structured speech.

Apparently, when royals give a speech, the whole thing is thought out ahead of time, whereas Scobie said that as he understood it, Meghan “had bullet points” and she was “perhaps a little punchier than we’ve seen in the past.”

He thought that Meghan Markle spoke much more from the heart than from a script, and that the speech foreshadowed what she wants to focus on going forward, which is gender equality, racial injustice, and youth empowerment.

It would seem that Meghan is choosing her speeches very carefully, so that she can craft her agenda and her post-royal persona. Meghan and Prince Harry are currently developing their new charitable organization called Archewell, which is expected to launch in 2021.

The foundation was originally to launch this year, but due to the coronavirus pandemic, its launch had to be pushed.

Royal watchers are anticipating that Archewell’s activities will be focused on causes near and dear to Meghan and Harry’s hearts, and we’ll likely continue to get a sense of what those causes will be as time goes on and Meghan and Harry do more public engagements. Be sure to check back here at CDL for more British royals news and updates.