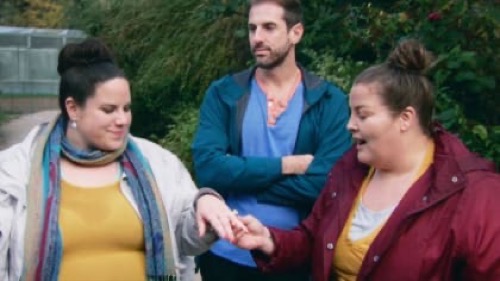 In tonight’s My Big Fat Fabulous Life season 8 episode 1, “Wedding Bells Are Ringing,” as per the TLC synopsis, “Now four months into their engagement, Whitney and Chase are no closer to living together, but wedding plans need to be made; during a mountain weekend getaway with their friends, Whitney’s new boundaries with Buddy are put to the test.”

Whitney got engaged in Paris. Her boyfriend Chase proposed to her on top of the Eiffel Tower. It was so romantic and it was also such a shocker because they haven’t known each other that long. Whitney and Chase were still new. Their friends even thought it was too fast because they all said that Chase should have waited to propose and at the same time these same friends hadn’t wanted to ruin the moment. No one spoke up to say this was going to fast. They didn’t want to hurt either Whitney or Chase and so they stayed silent on what they really thought. They instead offered up their congratulations as if they really meant it.

It was pretty clear that her friends weren’t in on the proposal. They didn’t know that Chase was going to propose to Whitney because if they had they probably would have said something to him and so Whitney wasn’t the only one surprised. She originally traveled to Paris for a business trip. She went there with her business partner Ryan and a few friends and they were going to work on her new business called “No BS Active”. Her business partner Ryan is one of Chase’s best friends and he was another one to say this proposal came too fast. Four months later, people still had misgivings and luckily Whitney hadn’t gotten married at that time.

She and Chase were still engaged. They didn’t live together because Chase received an amazing job offer a month after they got engaged and that’s increased his commute. The couple also hasn’t planned a single thing. They were pre-planning stage and so far the only thing they have planned is a vacation with their friends. The couple wanted to bring their friends together because they knew not everyone gets along. Whitney’s good friend Buddy didn’t get along with Ryan and she wasn’t going to choose between the two. She wants both of them in her life. She asked Chase to speak with Ryan and she would speak with Buddy. And she was working on putting up some boundaries with a buddy while she was at it.

Whitney and Buddy have this weird dynamic. Whitney knows that she needs to be less touchy-feely with him out of respect for Chase and so she was hoping that Buddy picked up on her changed demeanor during their vacation together. She didn’t want it to turn into some big thing. She wanted it to go smoothly and right before she had this vacation with everyone she visited her parents with Chase. Chase hadn’t gotten Whitney’s father’s approval. Whitney’s father was also a traditional man and so it made things awkward between them. Chase was also very careful around his future father-in-law. He and Whitney had stayed longer at their house than they initially planned just because they didn’t want to offend anyone.

Only with both of them out of the way, their friends came together to discuss the engagement. They all thought it happened too fast and they said the couple should at least be living in the same city before they get married. They couldn’t get married and never lived together. The friends were all saying how this was a bad idea that Buddy and Ryan were actually getting along because they both agreed with that sentiment. Buddy got a ride to the house. He carpooled with Heather and so Whitney had questions by the time she arrived. She wanted to know how Buddy came to be sharing a car with his ex-girlfriend.

Whitney had questions. Chase just wanted to chill and it wasn’t long before Buddy was making some rude remarks to Chase. Chase did his best to ignore these remarks. He said that’s typical Buddy. Whitney’s other friends also asked when the wedding was and where it was going to be. It was all overwhelming to Chase. He had needed a breather and Whitney had realized it in time. She comforted him. She was there for him and at other times she was hanging out with her friends. She asked Heather about carpooling with Buddy. Heather said that Buddy had made amends to her for stringing her along for long and that afterward, they became closer.

Whitney also told her friend to ease up on Chase. She was trying to get him to enjoy himself and so she did speak with Buddy about the touchy-feely. She told Buddy that it had to stop. They were friends and they can hug and everything, but he couldn’t pull her onto his lap anymore and he had to be respectful towards Chase. Chase is her fiancé. Whitney explained all of this to Buddy and it was like he was refusing to understand where she came from. He asked why the newest guy in gets to decide the rules. Whitney again said Chase is her fiancé and the other women there were backing her up.

Whitney chose Heather as her maid-of-honor. They used their friend-cation to ask people to join her bridal party and they pushed Chase into asking Ryan to be his best man. Chase hadn’t been planning to do that just yet. He felt pressured into doing so and so Whitney has already forgotten how easily he gets overwhelmed. One second she was being very supportive, the next second she told him he had to pick his best man right then and there. Chase had to choose Ryan because Ryan was right there. Who knows who Chase would have chosen if he had been allowed to do things at his own time table.

The group later moved on from wedding things. They all went on a hike and they were laughing and having fun when once again Buddy began acting out. Things were fine at first. They all shared a laugh when Whitney got stuck in the mud and Buddy had even helped her put her shoe back on. But it was as they were jogging that Buddy began complaining. He didn’t want to jog or climb over things. He said he wasn’t supporting it because he said Whitney was pushing it beyond what seems reasonable and so that’s when he began making remarks. He wasn’t expecting Whitney to snap back. She did and Buddy stormed off. He said he would have left if he had driven himself there.

And so their relationship was strained right now.