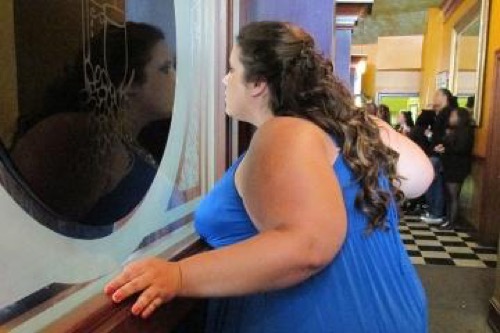 Tonight on TLC My Big Fat Fabulous Life continues with an all new Tuesday January 27, season 1 episode 3 called, “More Than a Buddy,” and we have your weekly recap below. On tonight’s episode since teaching dance has not led to weight loss, it’s time to take things up a notch with a personal trainer.

On the last episode, at 380 lbs. Whitney was working hard to make her “Big Girl” dance classes a success. But as things seemed to be looking up, the hateful jeers of a complete stranger delivered her a crushing blow. Did you watch the last episode? If you missed it, we have a full and detailed recap right here for you.

On tonight’s episode as per the TLC synopsis, “since teaching dance has not led to weight loss, it’s time to take things up a notch with a personal trainer. And her mom’s suggestion that Buddy is “the one” has Whitney questioning everything.”

Whitney’s father has brought her 14 scales, including a medical scale that he has asked her to try. She weighs herself to see how much she weighs after all the dancing she has been doing, and her weight is 382 lb. Instead of losing weight, she has gained.

Her dad comes into her room and asks how her dancing is going, and she laments the lack of weight loss despite working so much on her dance. She says she is getting social anxiety because when people invite her places, she’s worried if she will fit in the chair. He says he thinks some structure will help, and suggests a trainer.

Going to get lunch with her mom, Whitney gets into the car to find out the seatbelt barely fits around her.

Her mom suggests she and Buddy get together, and when Whitney says they are just friends, her mom says they didn’t always used to be. She says she sees the way Buddy acts around her and the way his eyes “sparkle” when he is around her.  Whitney says she thinks Buddy is hot and has a “juicy butt.”

Whitney meets up with Brett, a personal trainer. Whitney is worried because she doesn’t know what she’s capable of and is afraid he will try to push her past what she can physically do.

Whitney hates the training, which is not fun like her dancing. She is also discouraged because she can no longer do a lot of things she used to be able to do with ease.

Whitney meets up with Buddy, who massages her butt after she tells him about her training session.

Even though she didn’t like her first session, she is determined to prevent further weight gain and her body becoming a disability, so she returns to Brett. She gets discouraged when she can’t do a burpee, something she used to be good at but now can’t do, but Brett gets her to do them.

Whitney and her parents hold a memorial for their dog, Georgi. Whitney busts out laughing when her mom gives an emotional speech about the dog.

Her parents chastise her for not putting Georgi’s name on her marker, and she storms off.  She tells her friend about the incident and says she needs to move out of the house.

Her friend suggests going to the beach, and Whitney says she hasn’t gone in 20 years, since the sixth grade. They go shopping for bathing suits, and she is worried about showing her legs. She ends up choosing a black bikini, which doesn’t make her feel like she is hiding her body like the one pieces she tries on.

Whitney talks in the confessional about being insecure about being in a bathing suit, often hiding behind a towel even when she was 115 pounds.

When she gets home, she shows her dad the bikini. He asks her if she wouldn’t be more comfortable in a one piece. She tells him she is going to show him the bikini again to get a positive response, but when she does, he can’t come up with anything. Then he brings up the marker for Georgi, and she decides if it makes him happy, she will do it, as she hates to disappoint him.

Whitney and her friend go to the beach. Someone takes a picture of her.  “People take pictures of me like I’m an animal in a zoo,” she says.

She takes off her coverup and frolicks in her bikini. She says in confessional she can’t live her life in limbo waiting to be thin again, and she needs to take risks in order to be able to inspire others.

Whitney enlists Buddy to help her find the perfect tombstone for Georgi. They’ve been spending more time together lately than usual, and she doesn’t know what that means for their relationship.

She finds a stray cat and picks it up, cuddles and cradles it, and smells its breath. She says she loves the smell of cat breath.

Whitney places Georgi’s tombstone, which she blinged out with rhinestones. Upon seeing it, her mother is overcome with joy and cries.