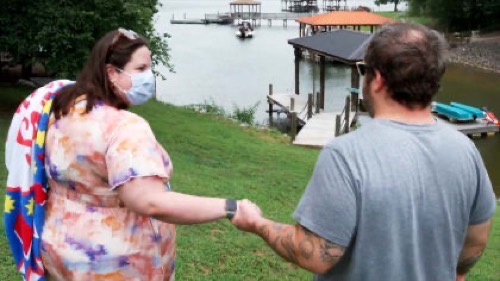 In tonight’s My Big Fat Fabulous Life season 8 episode 7, called, “Sex, Lies, and Sandwiches,” as per the TLC synopsis, “After a close encounter with an ex-boyfriend, Whitney wonders if she’s ready to move on from Chase. She escapes quarantine for a fun weekend friends’ trip.”

Lennie is back. Lennie is Whitney’s ex-boyfriend from four years ago. He also used to have a big bushy beard and he’s since shaved it. He looks like a new person. It even took Whitney a moment to recognize him when she saw him and she was also surprised to see him as well. Lennie reached out to her after her he heard she called off her engagement.

He told her some kind words and she thought he would leave it at that. She never suspected that Lennie would come over or that he would travel during a pandemic to see her. She was surprised to see him. She was also a little flattered as well that he would go to such lengths for her and so the two talked.

They got caught up on what’s happened the past four years. Lennie didn’t just lose his beard. He now rocks a shaved head and he was in town to do some pool work because he works with his dad. The two also shared some laughs. Whitney told him he was still handsome even without hair and she touched his head. She said this was as much intimacy that she could take right now.

She didn’t think she was ready for anything else because her engagement has just ended and she was still healing. Only Lennie later stayed the night. Lennie got up early the next morning to make breakfast and he beat Buddy to the kitchen.

Buddy is the one who usually makes breakfast. He was surprised himself when he saw that Lennie the next morning because he hadn’t known that Lennie stayed over and so he came to suspect that Lennie and Whitney slept together. Only Buddy didn’t keep his suspicions to himself. He later asked Whitney when she came downstairs if she and Lennie had sex and she said “gross”.

Lennie said it was “inappropriate”. The two of them had watched a post-apocalyptic film. It got late and so Lennie stayed over. It doesn’t seem like anything else happened, but if it did, Lennie would have been happy because he claims he still has feelings for Whitney and that’s why he came out to see her.

Lennie was looking for a second chance. He was hoping to get one by being a supportive friend that she could turn to in her hour of need and this time he arrived too late onto the scene. Whitney already has that friend. She has Buddy. Buddy was the one taking care of her and he was known as the new daddy to her animals. He also got super jealous when he saw Lennie making breakfast.

It’s why he asked such a question. He got jealous at the idea that Whitney might have moved on and so he wanted to double-check. Both Whitney and Lennie denied anything happened. They claimed to have fallen asleep watching a movie and so there was nothing for Buddy to be jealous of.

Lennie did notice how close Buddy was to Whitney. He said in an aside that he thought Buddy was a little too much up Whitney’s buttocks and that was more or less confirmed when both Whitney and Buddy basically pushed Lennie into leaving. They told him they had plans. They were going to the lake. They were going to spend time with their friends and so they didn’t have time for Lennie.

Nor did he have any uses. Whitney said that she has Buddy for when she gets lonely and she also said that after a panic attack one night she had asked Buddy to sleep in the same bed as her because she didn’t want to be alone. And so Lennie said he was also sleeping alone, but it didn’t really matter to Whitney because again she has Buddy.

Lennie eventually left. This gave Whitney the opportunity to talk to Buddy about how lonely she felt and she said told Buddy that they could stay living together for the rest of their lives because they didn’t know anyone else. Only Buddy isn’t single. Buddy informed Whitney that he was dating someone. He’s been dating a woman for about a week and he’s already calling her his girlfriend.

Buddy said he wasn’t wasting any time because he knew this woman was the right one for him. It did seem odd that he was asking for a marriage contract not so long ago and suddenly he has a girlfriend, but Whitney thought it was witchcraft.

Whitney thought the universe was telling them that they won’t going to be together. She was also a tad jealous herself because she hasn’t met anyone and the pandemic means she can’t even hook up with anyone either. She would usually celebrate ending the relationship to one man by getting underneath another. She couldn’t that with the current situation and so she’s been settling for a pandemic partnership with Buddy.

Buddy has been a coronavirus husband. He’s been there for her through it all and now she feels alone again. Whitney didn’t know how to deal with Buddy’s new girlfriend. She also didn’t know what it meant for them.

The two were living together. Knowing how fast Buddy moves, Whitney wondered if he would move in with his new girlfriend and so she talked about it with her other friends up by the lake. Buddy was off on his cell phone. Whitney and their friends were alone and so she told them all about his new girlfriend. She also mentioned the marriage pact and how they renewed it.

Whitney came across as jealous to a few of them. They thought she secretly wanted Buddy for herself and so Whitney shouldn’t have told Buddy that he could invite his new girlfriend to the lake-house. The house was just supposed to be for them and their friends. And it wasn’t.

Buddy invited Brittany over. Whitney ended up inviting Ryan to the lake-house. Ryan has been trying to hang out with her and she hasn’t really been feeling it because Ryan reminds her of her ex. Only Ryan called her while she was there. He wanted to check up on her and she felt so bad about phasing him out that she invited him to the house. And her own friends weren’t happy about that because they thought Ryan was the enemy.