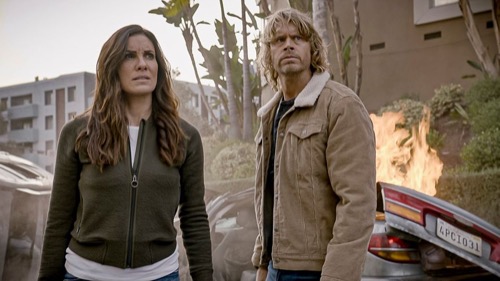 Callen asked for a favor. He wanted Nell to help him find his ex-girlfriend Anna. He believes Anna was involved in a homicide in Barcelona and he wanted Nell to uncover her involvement. Callen also wanted this to be done off the books. He didn’t want anyone else on the team to know that he was looking for Anna and so Nell promised to help. She said she would look for Anna. She had to hide it as she was working on a new case for the team and so not even Eric knew what Nell was secretly doing.

Eric only knew about the case. A former serviceman had left the Navy to join the private sector as a software engineer and he was later killed at spoken word poetry reading. Kensi and Deeks went to the venue for the event. They were there asking around to see if anyone recognized Michael Carpenter or if there was anyone else stood out and unfortunately they got nowhere. Neither did the other team. Sam and Callen went to the tech company where Carpenter worked and they learned he was building a search engine.

The company was called “Go Go Go”. It received backing from the same Chinese shell company that tried to kidnap Eric and so he was a little touchy about it. He mostly left it to Nell. Nell was the one that found the connection and she believes the tech company was more than just a search matter. No matter what they may claim. The guys spoke to Carpenter’s coworker and, while they didn’t get much from him, they received more information from Special Agent Deschamps. Deschamps was involved with this case and she said the “search engine” got Carpenter killed.

Carpenter and his friend Miguel were working on Project Dragonfly. It was a project in which Google created a search engine for Chinese that directly reports to the government and well news got. A bunch of human rights groups protested the project until Google dropped it. But the Chinese just found another company. They went to Miguel who agreed to take on the project and so Carpenter was working on a search engine that could lead to mass arrests and human rights violations.

Deschamps has been working on disentangling the dark Chinese money angle. She knew about the project and the group that was protesting against it. The agent gave the guys important information. She also decided to stay working this case with them and so they went back to the office to see what the other team found. Kensi and Deeks found surveillance of Carpenter with a woman. This woman was identified as Daisy Patel and she was an activist. She was big on the environment and so Kensi and Deeks later asked her about it.

They asked Daisy if she knew what Carpenter was working on. She said she didn’t. She said her boyfriend never told her what he was doing and both Kensi and Deeks figured she was telling the truth. There was no way a huge activist like Daisy would be dating Carpenter if she knew what he was doing. Carpenter and even Miguel had kept this project Top Secret. Not many people knew about it and so Nell tried to find out who did. She later found that the company has an advisory board and she recognized one of the names.

One of the names was Katherine Casillas. The team have worked with Katherine in the past and so they thought she would be honest with them now. They went to go see her at a restaurant. They asked her about what the company doing and she knew. She knew and she didn’t care. Katherine surprised them all with how callous she was being. She didn’t care that the Chinese were going to use this search engine to spy on their own people. She was all about what she could get out of it and so Sam had been thrown. He had thought better of her until then.

The team eventually received a call from Go Go Go. The company called the police because their office had been ransacked and someone had kidnapped their CEO. Miguel was gone. A man and woman grabbed him and then stole whatever they could find at the office. So, Deschamps suggested they go back to Katherine. They brought her to the boat shed and they asked her about the company. They tried to get a straight answer out of her but no go. She wouldn’t tell them why the engineers had all taken pay cuts to work at the company and where the money was coming from.

All the team knew was that it seemingly came from China. They also figured it was a child’s play because no one is concerned that Miguel is missing and so Nell and Eric found out information on the kidnappers. They identified the man as a Saudi national. They then brought their information to Katherine and that’s when she finally told them the truth. Katherine said that the Chinese backers had shared with the Saudis what Go Go Go was building for them. The Saudis then became jealous. They wanted a search engine for themselves and Miguel as the CEO had turned them down.

The Saudis most likely killed Carpenter as a way to frighten the company into sharing their information. When that failed to work, the Saudis broke in and stole whatever they could find as well as the CEO to help them make sense of it all. The team soon found the Saudis and that led them to Miguel. The team rescued him. They confirmed with him what he was doing and he said that he had gotten together a group of friends because they were secretly working to make sure the code never works.

China was never going to get a search engine to turn on its own people. Go Go Go was working against them and it had all been Katherine’s idea. Katherine wasn’t as cold as she pretended to be. And so things with Sam went back to their version of normal.

Nell meanwhile had information for Callen. She told him that the person involved in the homicide was connected to several other crimes across Europe and so Anna may have gotten herself into some trouble.