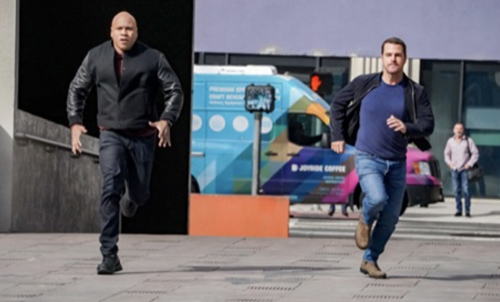 Tonight on CBS NCIS: Los Angeles returns with an all-new Sunday, March 29, 2020, season 11 episode 19 called, “Fortune Favors The Brave,” and we have your NCIS: Los Angeles recap below. On tonight’s NCIS: Los Angeles season 11 episode 19 as per the CBS synopsis, “Sam investigates the murder of an Iranian exile working to overthrow the current regime, and he must also try to save Agent Roundtree, a new agent who’s having an unexpectedly adventurous first day on the job when he accidentally triggers a bomb. Also, Nell makes a decision about her future with NCIS.”

A man on a beach with his metal detector thinks he struck gold. It’s just a penny. But seconds later the detector goes off again. He begins to dig and pulls out a severed hand with a watch on it.

Callen is supposed to be getting ready to leave on a trip with Anna. Sam tells him to get going. He needs to stop working. Callen comes to see Hetty. She also tells him to get moving she doesn’t wanna see him for two weeks. Before he leaves, she says something strange but she won’t explain what she meant. He runs to Sam who tells him not to worry and just get out of town.

A new associate by the last name of Roundtree arrives. He is thinking of joining NCIS. Fatima shows him around. Meanwhile, now tells Kensie it doesn’t feel right coming to work anymore. Sometime she doesn’t even wanna get out of bed in the morning. She doesn’t know what she wants to do.

Eric calls the team together. They have a new case. There’s a gentleman who is missing and his hand was found on a beach. The man has been identified with the last name of Larian. He apparently learned something that he was going to alert the authorities to but before he could he went missing.

Marty brings Roundtree to go see Hetty. She’s busy with her paperwork and not up much to talk. She tells Roundtree a few words of wisdom, don’t get yourself or anyone else killed.

Fatima and Kensie go to see Larian’s daughter. Marty and Rountree go to scope out the area where the victim’s last GPS location registered. They find the victim’s car. Roundtree sits on the driver’s side to pop the trunk when Marty quickly learns that there’s a bomb in the glove box. Roundtree cannot move unless he wants to be blown up.

Help arrives. They’ve never seen anything like this type of bomb. Roundtree is sweating heavily will Sam makes a joke about sitting tight. After working on the situation they come up with a game plan. Using the above bridge is a pulley and some liquid nitrogen, they save the day. Roundtree thinks they are crazy!

Eric keeps searching for Nell but she hasn’t been seen all day. He runs into a quick but she runs in the opposite direction. He is picking up on her avoiding him. She talks to him through updates on the case really fast before taking off again.

Kensie comes to see Marty who is sitting off to the side looking sad. He tells her that he almost got Roundtree killed. She gives him a pep talk with love before telling him to shake it off. The team meets up. They’re trying to figure out why anybody would booby trap the car if they already have the victim.

The team splits up to get to work. Sam tells them all to be careful, whoever is behind this is very serious and skilled. Roundtree goes with Sam this time.

Fatima and Kensie talk. They wonder if Roundtree will stick with them after this. The days have been rough so far. While sitting in their car they see the victim’s daughter. She gets nervous throws something in a bush and runs for it. They take her down and realize that she threw files in a bush and also has a gun on her. Sam and round tree arrive shortly after. They have a doctor in custody who they are going to speak with. Apparently the daughter was going to bring her some files so now she is a person of interest. In the other room, Fatima talks to the daughter who acknowledges her father knew about the rising tensions between his homeland of Iran and the US. She doesn’t give much up. They decide to let her go but she doesn’t know is that Marty has put a tracker on her vehicle.

While trailing the daughter, Marty sees several men in a car following her. When she pulls over they go after her. He intervenes. Gunshots are fired.

The team arrives. They get them into custody and go through their cell phones. They find a video of the victim being tortured and killed. Sam since the video to Eric and he wants him to determine where their victim has been. He gives him a location and they all head to a nearby home. Sam comes across a man in the home and has to take him out. He blows out the picture window. The bomb squad takes over from there. They have their men.

Nell sits to talk with Hetty. She asked Mel when she is going to tell her about her decision to resign. Nell doesn’t know how she knew. Hetty tells her it is her decision. She has to talk to Eric.

The team has to have some drinks and unwind after their case. They all make jokes about Roundtree’s day.