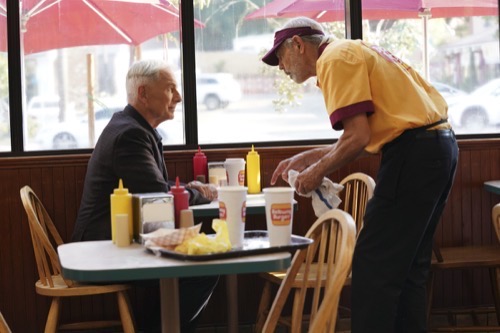 Tonight on CBS NCIS returns with an all-new Tuesday, December 8, 2020, season 18 episode 3 called, “Blood and Treasure” and we have your weekly NCIS recap below. On tonight’s NCIS season 18 episode 3, “Blood and Treasure,” as per the CBS synopsis, “The discovery of two dead bodies in a forest leads the NCIS team into the wild world of modern-day treasure hunting. Also, Gibbs and Fornell get deeper into their search for the opioid kingpin.”

Former FBI Special Agent Tobias Fornell is still investigating the drug ring responsible for his daughter’s overdose. The man is obsessed with finding someone to blame and he found someone. Tobias found the man pushing counterfeit opioids. He followed him to a pill mill and Tobias had even been there when this man died. He died from an overdose. There was nothing Tobias could do to save his life. Not that it stopped him from trying. He called 911 and he looked through the man’s pockets while he was there and so he wasn’t going to let a little thing like death stop him from working the case. He found out this drug pusher was working for minimum wage at a fast-food restaurant and that just didn’t make sense.

This man was making thousands as a drug dealer. He didn’t even need a day job much less a job that was heavy in manual labor and light in payment. Its highly suspicious that a man like that would work for minimum wage. Tobias wanted to find out what was going on and so he got a job at this fast-food place. Tobias believe the joint was operating as a front. He just didn’t know what it was front for and so he got a job there. He was out on his break when he finally caught up with Gibbs. Gibbs was helping Tobias in finding out who was behind this counterfeit drug ring and he was suspicious of what Tobias might do by himself. Hence he was working the case with Tobias. He was mostly doing it to keep his friend out trouble and he wasn’t being successful.

Tobias almost blew the whole investigation back at the pill mill. The pill mill is where anyone could walk in claiming to suffer from some minor ailment and receive their heart’s content of prescription drugs. Tobias spotted a young girl at the pill mill. She reminded him of his daughter and so he tried to convince her to call her parents. He freaked out the girl. He also was almost caught by the people running the pill mill. It was Gibbs who saved their cover and Gibbs was questioning the fast food gig as well. He didn’t see why Tobias had to get a job there. They could just sit on the place and take account of any suspicious movements. Only Tobias had to do things his way. He was going to stay at his new crap job and Gibbs was happier to return to his job as an NCIS Agent.

The DeMint treasure is real. Angus DeMint was a successful businessman who decided to live off the grid and so he decided something fun with his life savings. He turned two million into gold. He then buried it somewhere. He left clues on how to find it in a book he wrote and now hundreds if not thousands have gone looking for it. It was the DeMint treasure. Angus DeMint was the only one who knows where the treasure and he wasn’t telling. NCIS tried to get answers. They went to his cabin in the woods and they told him that a man had been murdered for the treasure, but he didn’t care. He said he created the treasure hunt because he wanted to convince more people to go out into nature and the truth is probably closer to what his daughter Margot believes. She believes her father has a God complex.

Margot owns the house in the woods. She was also the one that bought all of her father’s groceries and she would even take them to him. Her father hasn’t been living with nature. He lives on his computer. He’s obsessed with following a message board that talks about his treasure hunt and so he likes all the chaos he brought with that stupid book. He pay attention to anything else. Not even his own daughter. Margot is the one keeping his alive and she thought it was childish that he didn’t help NCIS. She understood that someone had died because of what her father did. She therefore went to the team’s office and she gave them a list of people her father speaks with on the message board.

What she did was perfectly legal because again she owns the house. Margot’s list proved to be helpful because the team found a group that Barnes was working with and Barnes told his group that he had found the cipher to solving the clues that Angus left in his book. There was just one problem with this cipher. He didn’t share it with his friends. He told them that he was holding onto it to make sure that it was the correct one and that led to someone tension in the group. It was a three person group. There was Barnes and the other two were dating. They even alibied each other. They claimed they were at home in bed the night Barnes was killed and two suspects couldn’t be each other’s alibis.

There was also another problem with Angus. Angus disappeared. He staged his cabin to look like a break-in and he apparently went after the killer. It didn’t make sense to the team but it did to Sloane. Sloane read Angus’s book. It was basically a love letter to his late wife Lillian. Lillian loved treasure hunts and they used to do small ones with their daughter. Angus wished to continue to this legacy, her legacy by creating a real life treasure hunt. It was the last gift to his wife and he didn’t want anyone desecrating it. Angus buried the treasure. He then wrote the book and it describes how happy he was when he met Lillian. There were some old family photos in there as well. Margot had been brought down to help them with their investigation and she realized that her mother’s favorite spot where the went hiking every year was where the treasure was hidden.

Margot gave this clue to Gibbs. Gibbs gave the photo to Kasie and Bishop and they cheated to find the treasure. They hacked the location of Angus’s burner cell. They then used it to find the place where he often visited over the years and they found the location. They also found Angus. He was trying to find the killer and it led him to the member of Barnes’s group. Only it turns out the two suspects didn’t have an alibi. They lied about it to protect themselves and so they got in trouble and so did Angus. Angus was brought in for obstruction. He called Margot because he needed a lawyer and unfortunately he got someone else. His daughter had been taken hostage by a third party. This guy was a gym receptionist.

He worked at the gym that Barnes used with his friends. Barnes and his friends would talk about the treasure hunt and so this guy decided to cut through some steps. He tried to get the location from Barnes. That didn’t work and so he kidnapped Margot. Again, this didn’t work. The team found out about it and they led their kidnapper to a trap. They were later able to free Margot. They also reunited her with her father who realized that Margot is the greatest legacy Lillian ever left him. the two plan on working on their relationship.

And the DeMint treasure was solved by the team.

Gibbs later went to go check on Tobias and unfortunately Tobias is missing.