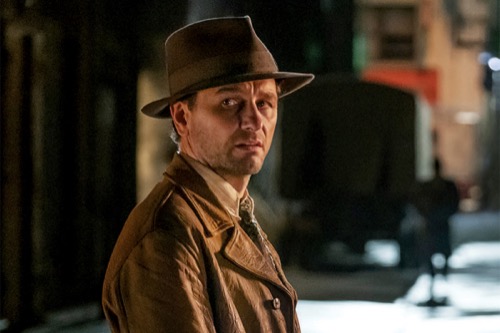 Tonight on HBO their new series Perry Mason Based on characters created by author Erle Stanley Gardner, airs with an all-new Sunday, June 21, 2020, episode, and we have your Perry Mason recap below. In tonight’s Perry Mason season 1 episode 1 called “Chapter 1,” as per the Showtime synopsis “In 1931 Los Angeles, PI Perry Mason is hired by attorney E.B. Jonathan to solve a perplexing case involving the brutal kidnapping of 1-year-old Charlie Dodson, whose parents Matthew and Emily were targeted for a $100,000 ransom.

After meeting with Herman Baggerly, a millionaire elder at the Dodsons church, Perry, E.B., and E.B.’s legal secretary Della Street ponders why a family of unmistakably modest means would be extorted for such a steep price. Series premiere.”

Perry Mason the season 1 episode 1 airs at 9 PM – 10 PM ET on HBO. Make sure to bookmark this spot and come back for our Perry Mason recap! While you wait for the recap make sure to check out all our television recaps, news, spoilers & more!

A man on the phone threatens a couple. He has their young son and in return, he wants the man’s suitcase which is filled with money. When they get to their son they discover something is wrong with him.

Perry is at a diner with a friend. They are tailing a man named Chubby. He heads to the movies and does nothing wrong. After the movie, they follow Chubby to a woman’s house. Perry sneaks inside and finds the pair having sex with food. It looks like Chubby has a fetish. Perry takes photos but gets caught. He runs for it.

At home, Perry checks the mail to find late notices. He looks to find his cow. She has wandered off. He locates her and brings her home. Later, Elias shows up. He tells him his parents would want this for him, the farm, the struggle, and all. He tells Perry all about a new opportunity. They agree to meet at 3.

Before meeting with Elias, he manages to sell the photos of Chubby for a few hundred. He heads to court where he is forced to take the stand after buying a tie from a friend at the morgue.

Perry meets with Elias, Delia, and a gentleman who wants to hire him to look into the kidnapping of a couple’s son. Perry agrees and heads right to the couple’s home where they are being interrogated by the police.

Perry looks around the home and in the baby’s room. The mother comes. In. They smoke and talk. Perry has a 9-year-old son, he tells her. She cries, leaving the room.

At the office, Perry, Elias, and Della go over the case. They discuss how the mother could go to bed and not realize someone was in her house. Maybe she was tired?

At home, Perry has sex with Lupe. He asks her to stay the night. She refuses.

The next day, Perry visits the room where the couple left the suitcase. He runs into the police and shares a few clues of his own, ones they had no idea about.

At the morgue, Perry views the baby’s body. The baby’s eyes were sewn shut. His friend who runs the morgue allows him to take evidence.

At a holiday party in celebrating New Year’s Eve, Perry meets with a group of big shots over Chubby’s photos. They strong-arm him, giving him only a $1 while threatening him. He stumbles injured back to the party.

A few blocks away, several men are talking about the baby when a cop who roughed up Perry earlier comes in and shoots them all dead.

Back at home, Perry is drunk making phone calls when Lupe comes in. He tells her everyone has an angle. He begins to re-examine several photos from the case, trying to piece it all together.