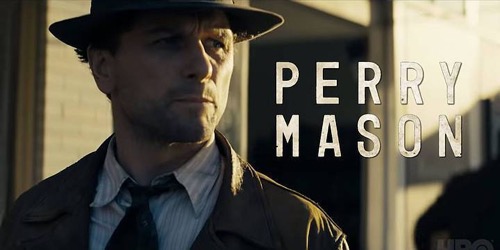 Tonight on HBO their new series Perry Mason Based on characters created by author Erle Stanley Gardner, airs with an all-new Sunday, July 12, 2020, episode, and we have your Perry Mason recap below. In tonight’s Perry Mason season 1 episode 4 called “Chapter 4,” as per the Showtime synopsis “Mason and Strickland lean on Virgil, again, for extra-legal assistance. Following Sister A

lice’s recovery from a frightening episode, Birdy urges her daughter to renounce her claims about baby Charlie. E.B. faces the reality of his financial situation and takes his frustrations out on Della.”

Perry Mason the season 1 episode 4 airs at 9 PM – 10 PM ET on HBO. Make sure to bookmark this spot and come back for our Perry Mason recap! While you wait for the recap make sure to check out all our television recaps, news, spoilers & more!

A family visits Sister Alice. The little girl has a bakery box. She offers Alice sweets. When Alice looks inside she finds a snake. The family is taken away, insulting Alice as they are dragged out.

EB meets with a judge about Emily. He tells them she was smacked around when Della went to visit her. The judge moves her into protective custody.

Perry and Pete call Virgil to the house. They have stolen George’s body. They want Virgil to perform a proper autopsy. They believe George was murdered.

Sister Alice’s doctor tells Birdy and those from the church that Alice needs to rest for a few weeks after her episodes. Birdy believes Alice will return stronger than ever. She has before. After the doctor leaves, leaders of the church tell Birdy she needs to censor Alice who shared she could resurrect the child.

EB leaves the bank, upset after he is denied a loan. Della walks with him. He tells her to mind her business. Later, Perry and Pete meet with EB. They left George’s body at the golf course. This way EB gets an accurate autopsy. They also share their theory that George was murdered.

EB meets with the DA who has nothing good for him. He threatens EB with disbarment or the loss of the case.

The DA meets with the detectives on the Dodson case in the bathroom. The DA is mad that EB has suggested a fourth suspect via the help of Perry Mason.

While talking to Teddy at a payphone, Perry is threatened by a man he took photos of. Meanwhile, EB is panicking, trying to find files to help the Dodson case. He yells at Della who has had it. She tells him to drive himself home. She has a pristine filing system, she tells him.

Perry and Lupe lay in bed naked. She wants to buy his house still. He doesn’t want to sell. He is the last of his family. If he sells, no-one will even know the Mason’s existed.

Della arrives home after a long day. She gets in bed with her girlfriend, telling her about how angry she is and she doesn’t know where to put it all.

Perry visits EB in the morning who wakes on his office couch. He yells for Della who has taken the day off.

Alice tells the public she has made a mistake about sharing that she can resurrect Charlie. But after a man brings her a blanket for Charlie, she quickly speaks the truth about how she feels going against church leaders.

EB meets with Emily. He believes her but prepares her for tough times ahead. He knows he can get her a reduced sentence. He gets emotional telling her. She too gets upset at the thought of 20 years. After a silence, he becomes determined. He tells her that they are going to fight.

Pete and Perry go over how the murder and the ransom went down. They visit the scenes trying to understand what really happened. They visit the Elk’s Club. He sees the detective sitting, attending an auction. Children are on the stage. Perry speaks with him about investigating the case.

EB turns the gas on in his home. Dressed in a suit, he sits in the chair and takes deep breaths.